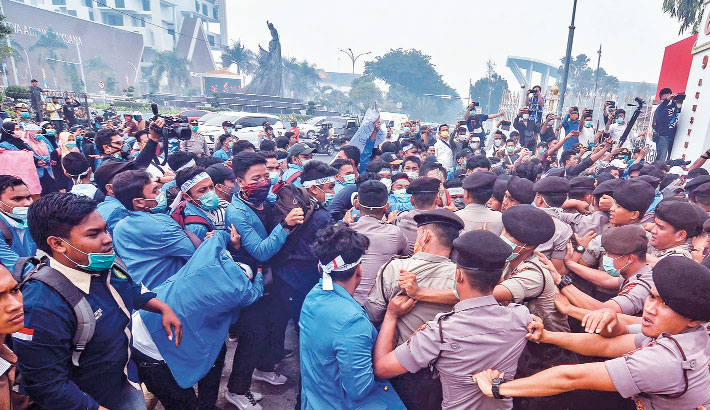 A scuffle broke out with police as hundreds of Indonesian students gather to protest outside the office of the Riau Governor in Pekanbaru on Monday, demanding the government to do more to fight the raging forest fires in the region. - AFP PHOTO

PEKANBARU: Thousands of Indonesian firefighters are locked in an around-the-clock game of Whack-a-Mole as they battle to extinguish an invisible enemy—underground fires that aggravate global warming, reports AFP.

Vast blazes are ripping across the archipelago’s rainforests, unleashing a toxic haze over Southeast Asia that has triggered health fears and sent diplomatic tensions with Indonesia’s neighbours soaring.

But many of the blazes smoulder deep underground in once-swampy areas known as peatlands, where they can last for months and release eye-watering amounts of thick, acrid smoke. “It’s so much harder to fight fires on peatlands,” a dirty and exhausted Hendri Kusnardi told AFP outside smog-hit Pekanbaru city in Sumatra. The culprit behind Indonesia’s blazes is usually illegal fires set to clear land for the lucrative palm oil and pulpwood industries—and the situation this year has been worsened by drier weather.