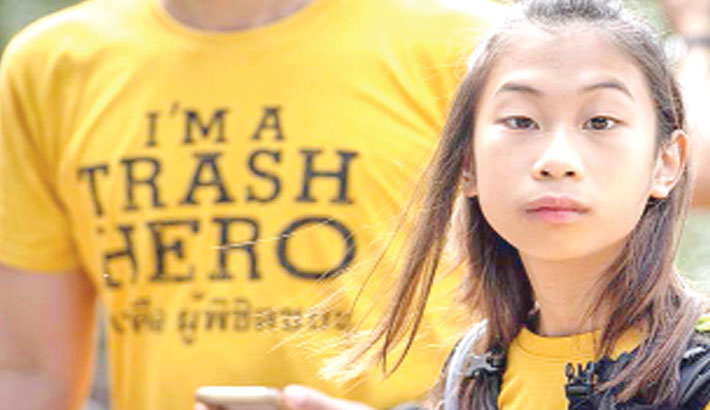 Skipping school to glide through a dirty Bangkok canal on a paddleboard, Lilly fishes out rubbish in her mission to clean up Thailand, where the average person uses eight plastic bags every single day.

“I am a kid at war,” the bubbly 12-year-old says after a painstaking hour-long routine picking up cans, bags and bottles bobbing in the canal, reports AFP.

“I try to stay optimistic but I am also angry. Our world is disappearing,” she adds.Thailand is the sixth largest global contributor to ocean pollution, and plastic is a scourge.Whether it’s for wrapping up street food, takeaway coffees or for groceries, Thais use 3,000 single use bags per year — 12 times more than someone from the European Union.

In June, Lilly won her first victory: she persuaded Central, a major supermarket in Bangkok, to stop giving out plastic bags in its stores once a week.

“I told myself that if the government did not listen to me, it would be necessary to speak directly to those who distribute plastic bags and convince them to stop,” she explains.

This month some of the biggest brands, including the operator of the ubiquitous 7-Eleven convenience stores, pledged to stop handing out single-use plastic bags by January next year.