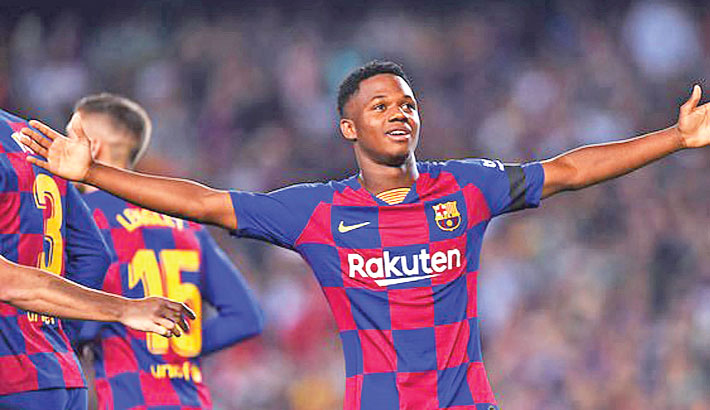 The Blaugrana had failed to beat Valencia in three meetings last season: two draws in La Liga and a defeat in the final of the Copa del Rey in May.

But the Mestalla-based side had sacked their coach Marcelino against the wishes of their players on Wednesday and Albert Celades, a former Barca player, was thrown in at the deep end for this one.

Ansu Fati, on his first start for Barcelona’s first team, opened the scoring after just two minutes when he hit a fierce shot past Jasper Cillessen from close to the penalty spot following a low cross from the right by De Jong.

And the youngster returned the favour after seven minutes, cutting in from the left and playing the ball back from the byline for De Jong to smash into an empty net for his first Barca goal.

Kevin Gameiro pulled one back after a one-two with Rodrigo Moreno and although the French forward initially saw his strike ruled out for offside, VAR overruled and it stood.

There was not much in it at that point, but Cillessen spilled a Griezmann shot and Gerard Pique was on hand to poke home the rebound after it had hit the post.

Suarez then replaced Fati and got his name on the scoresheet almost straight away as his long-range shot went in off the post after 61 minutes.

The Uruguayan rifled in another from a Griezmann pass with eight minutes left and even though Maxi Gomez netted for Valencia in added time, it was a comprehensive win for Barcelona in the end.

Barca move provisionally up to fourth with seven points while Valencia, on four points, are down in 14th after four games.

Lionel Messi misses out tonight, but Luis Suarez is back for the Blaugrana.