Saifuddin returns with a bang 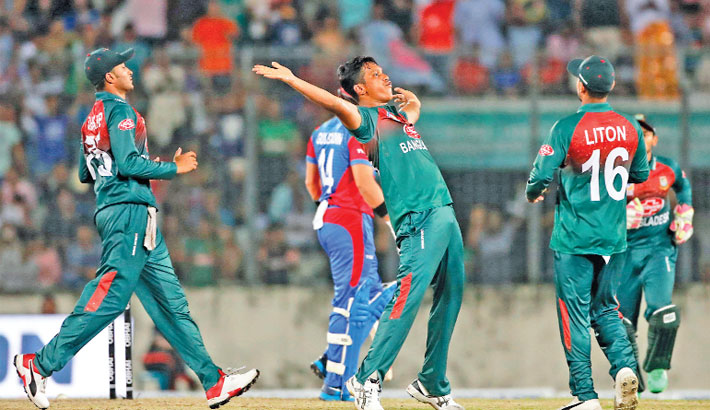 Mohammad Saifuddin grabbed his career best bowling figure as he picked 4 wickets for 33 runs to help the hosts restrict Afghanistan to 164 runs in the T20 Tri-nation Series at Sher-e-Bangla National Cricket Stadium on Sunday.

After missing out the one-off Test against Afghanistan due to injury issues, Bangladesh pacer all-rounder Mohammad Saifuddin showed that he is pumped. His two breakthroughs in the first two overs proved monumental for Bangladesh.

While the two wickets which he got in an over at the latter stage also looked to have created a big difference considering Asghar Afghan was looking dangerous batting on 39 runs.

Afghanistan were 40 runs for 4 wickets at one stage before a 79-run stand between Asghar Afghan and Mohammad Nabi helped them resurrect their innings. Just when Asghar was preparing to launch a full blown offence, Saifudin bowled him to bring the hosts back into the game and three balls later he bowled Gulbadin Naib to further strengthen their grip on the match.

He finished with bowling figures with 4 wickets giving away 33 runs largely due to the fact he was hammered in the last over which cost him 17 runs.

Saifuddin was handed the ball to try out his luck against Afghanistan as the right armed fast bowler picked Afghan opener Rahmanullah Gurbaz’s wicket on the first ball the innings.

Gurbaz’s  43 runs off 24 balls gave the Afghans a fine start the previous day against Zimbabwe. But his early departure against Bangladesh put his team under pressure all thanks to Saifuddin.

Saifuddin’s initial break led Bangladesh to another success in the second over as another Afghan opener Hazratullah Zazai’s under-powered shot never looked destined for the gallery but ended up in the palm of Liton Das who was the boundary rider.

Afghanistan were already 2 down for 10 runs after Shakib Al Hasan’s over but then Saifuddin showed that he still has more to deliver for the team after the long break post ICC World Cup 2019.

The 22-year-old was hit for a six by Najeeb Tarkai in the third delivery of his second over but Saifuddin struck back with his next delivery as it saw the Afghan batsman walking off the ground after being caught by Sabbir Rahman.

The young fast bowler was again brought back into attack in the death overs of Afghanistan innings. Saifuddin kept on picking wickets as he claimed yet another one in the 17th over.

Saifuddin, who made his debut in 2017, enjoyed a mediocre ICC World Cup 2019 but the young fast bowler was often successful in bringing in the initial breakthroughs for Tigers. Despite the relatively high 7.19 economy rate in ICC World Cup 2019, the pacer took 13 wickets to become the second highest wicket-taker for Bangladesh.