PM asks police to be pro-people 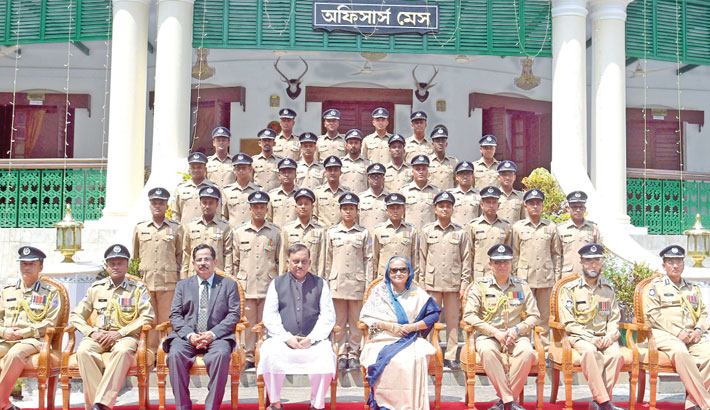 Prime Minister Sheikh Hasina poses for a photograph with probationary assistant superintendents of police (ASPs) at Bangladesh Police Academy in Sardah of Rajshahi on Sunday during the passing-out parade of the 36th BCS batch of ASPs. — PID Photo

SARDA: Prime Minister Sheikh Hasina on Sunday asked the police to ensure the welfare, peace and security of people as they are ‘the police of the people’, reports UNB.

“You’re the police of the people, it’s your responsibility to ensure their welfare, peace and security,” she said.

The Prime Minister was addressing the passing-out parade of the 36th BCS batch of assistant superintendents of police (ASPs) at the Bangladesh Police Academy here.

She also asked the police officials to build themselves as the ‘friends of people when they are in danger’. “You must discharge your duties sincerely.”

Sheikh Hasina said her government has advanced the country and is working to take it forward further. “We’ll build the country as Golden Bangladesh as dreamt by the Father of the Nation. So, it’s essential to ensure peace and security.”

The Prime Minister instructed the new ASPs to perform their duties with utmost honesty, sincerity

and devotion to uphold the glorious role of the members of the Bangladesh Police played during the Great War of Liberation and fulfill the expectations of people.

The Prime Minister took salute and inspected the parade.

She distributed medals among Mohammad Salahuddin, Mohammad Khairul Kabir, Saiful Islam Khan and Mohammad Abdullah and for their outstanding performances in different fields of the course.

The prime minister reminded the new ASPs that their parents, sisters and brothers are among people. “So, you should dedicate yourselves to serving people.”

She mentioned that the government has already introduced ‘999’ emergency service and people are getting required help from police after calling over the phone number.

Sheikh Hasina highly appreciated the police force for their recent recruitment of 10,000 police constables without any corruption and taking bribes.

Some 117 ASPs, including 17 female ones, took part in the training.

The Prime Minister later planted sapling of a mango tree on the academy campus.

She also took part in a photo-session with the probationary officers and cut a cake marking the passing-out parade of the ASP’s 36th BCS batch.