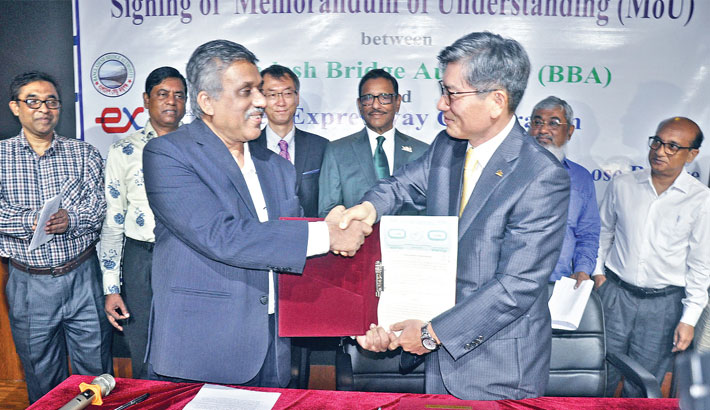 Bangladesh Bridge Authority on Thursday signs a memorandum of understanding with Korea Expressway Corporation for the operation and maintenance of Padma Multipurpose Bridge. Road Transport and Bridges Minister Obaidul Quader was present, among others, during the MoU signing ceremony at Setu Bhaban in the capital. —sun photo

Road Transport and Bridges Minister Obaidul Quader on Thursday said the construction of the 6.15-kilometre Padma Bridge is progressing fast as 73.50 percent overall work of the project has been completed, reports BSS.

“The overall progress of the Padma Multipurpose Bridge Project has reached 73.50 percent now while 83.50 percent work of the main bridge has been done so far,” he told reporters after witnessing a memorandum of understanding (MoU) signing ceremony as the chief guest at Setu Bhaban auditorium.

The minister said the KEC would install Electric Toll Collection (ETC) system for collecting toll from the Padma Bridge and the ETC lane will be operated automatically.

The KEC will also introduce performance-based management system for maintenance of the Padma Bridge. It will launch traffic information applications having ultra modern technology facilities, he said.

Quader said 28 spans so far were kept at Mawa point of which 14 spans were installed making 2.1 kilometre of the bridge visible.