We have to play with big heart, says Shakib 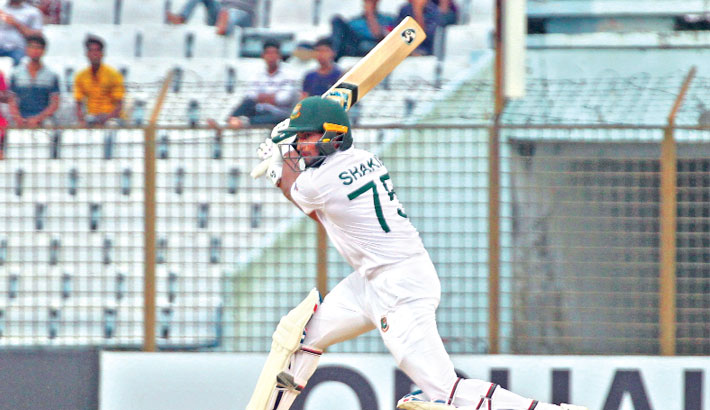 Bangladesh skipper Shakib Al Hasan plays a shot during the fourth day of their one-off Test against Afghanistan at Zahur Ahmed Chowdhury Stadium in Chattogram on Sunday. — Rabin Chowdhury

Bangladesh skipper Shakib Al Hasan spoke his heart out in the post-match press conference after the end of fourth day of the one-off Test against Afghanistan on Sunday where he discussed about issues ranging from approach to shuffling of the batting order along with not playing any pace bowler.

Is there a lot of pressure on you?

The pressure will always be there till I am there in the field.

Is Bangladesh reaping the harvest of bad planning?

If our plans were properly executed, this (situation) would not have happened. Because we could not execute the plans properly, that’s why it has happened. So it’s natural to blame our planning after that.

How did the decision to promote Mosaddek Hossain come about?

He looked to be the most comfortable one among us during the first innings against Afghan spin. And we faced a lot of spin bowling. So we made that plan yesterday (Saturday) night that if he bats up the order and play like that, he can play a big innings. He already has experience of playing big innings. He has scored four or five double hundred at first class level. So to chase 400, we needed some players who have the experience of playing big innings. That why we opted for this move. At the same time, he could be effective against the left arm spinners. So, we had a plan of going with left and right hand combination. That’s why we promoted him. He batted well but could not execute his plans. If he could keep that shot along the ground, it would be four and he would not get out. The situation could have been very different. It never looked that he could get out against the spinners.

Is our frailty against leg-spinners a technical or mental issue?

You can say both. As we don’t play wrist spinners too often whether it’s left or right handed, it’s something new for us. So we will have some issues with planning, no matter how much preparation we take. We brought many wrist spinners and practiced against them in nets. Until you play in the match and become successful, those practice session would not help much. I won’t say anyone had problem with their approach, the problem was in execution. Our lacking was that we did not play with a big heart. When you play with fear, we will face problem to execute. Like Liton, when he plays T20, he hits reverse sweep shot at will, but he could not do it in Tests. Coach has said the same, he wants us to play with open mind. Actually, we play with fear (in Tests). After all, It’s just cricket. But sometimes we take it too seriously so the pressure gets to us.

Should first class cricket be mandatory for national cricketers?

I did not play much first class cricket in the last 4 or 5 years but I do not face any problem. You have to ask them. Playing in NCL (National Cricket League) can be a problem as the quality of bowling attacks is very weak in NCL and players score 4 to 5 double hundred each year but they find it tough to score 5 runs in international cricket. Everybody problem will not have the same medicine.  There is lots of plan but you need to process out the plans. The processing time is very long when we play poorly people speak about it. People need to balance out their wishes.

Why the change in batting order?

As we are planning to chase 400 runs we have to shift our batting order. We did not chase 400 before .if we are chasing 200 runs, our batting order would have remained same but for chasing 400 runs we have to shift the batting order. We did it for betterment of the team. When the strategy pans out we say laud it but when it does not we criticise it heavily. Our plan was to not give wickets to Mohammad Nabi as their first threat was Nabi because a pace bowler was bowling from the other end .Due to left-right combination. Nabi did not get wicket in the first spell. We could not be successful in playing big innings. For chasing 400 we need to alter batting order. Basically you cannot question the planning because when it is successful we appreciate it and when it is not everyone deserts it.  Last night I was planning to play two right handed batsmen and I was planning to open with Mosaddek. Everybody was involved in our planning including the coach.

What is your prediction about fifth day?

We still need more than 270 runs but I am out there along with Soumya Sarkar and both of us have to score centuries. I will have to score 150 and he can score around 120 runs or vice versa. It is difficult but nothing is impossible. And there is rain and it can also save us. It is a challenge thrown at us as four of our batsman can show the world that we play well in home condition. We have to show our character and keep fighting till the end

Do our cricketers have the ability to face the odds?

There is ability in everybody expect Sadman because everybody have scored big runs and contributed in team’s success. As everybody can score runs they have ability but there is fine line in having talent and showing that talent in the field.

How would you rate Afghanistan’s performance?

Good. But we could put them in such a position where they would have to show their character as we could bring them into that position.

It is a big setback for us. How would you rate this performance?

We are fortunate as it did not happen in Test championship. I am disappointed nonetheless. We were beaten by a new team but this new team can beat anybody. We had also defeated strong teams. We have to respect them. They are in a position to open their account. We could have challenged them more.

What are your thoughts about not playing pace bowlers?

Our pace bowler’s economy is 4.41 so they will give 400 runs on day one and we will be out of the match in the first. If you see the stats, then you will see which pace bowler took wickets giving away how much.