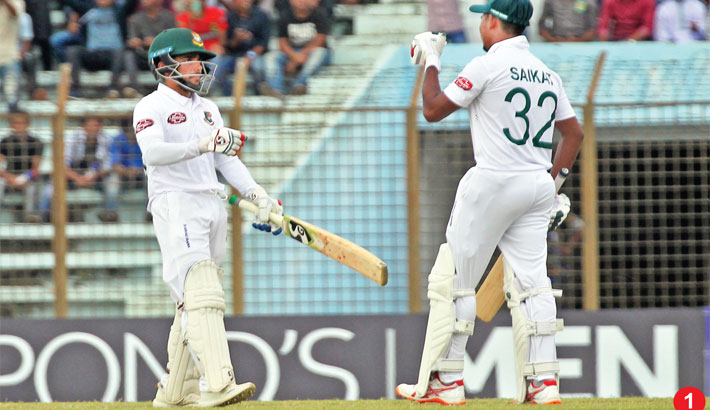 All-rounder Rashid Khan appeared as the big threat for Bangladesh as his all-round performance helped the visitors go on top against the hosts after the second day’s play at the Zahur Ahmed Chowdhury Stadium in Chattagram on Friday.

Leading the side from the front, he claimed 4-47 to help Afghanistan tighten the noose. Off-spinner Mohammad Nabi also took 2-53 as the hosts ended the second day on 194-8, with Mosaddek Hossain batting on 44.

Bangladesh are now trailing by 148 runs, after Afghanistan were dismissed for 342 in first innings, their highest total in Test cricket.

With the pitch offering turn and bounce aplenty the score looked mighty.

And Bangladesh fell in deep trouble when opener Shadman Islam chased a wide delivery off fast bowler Yamin Ahmadzai in the fourth ball to give a simple catch to wicket-keeper for a duck.

Liton Das and Soumya Sarkar steadied the innings to some extent with the former looking absolute control of his shot. Das was beaten inside edge against off-spinner Mohammad Nabi when on 1 but reviewed it successfully to overturn the umpire’s decision.

Nabi however got the rewards for hitting right length consistently with the wicket of Soumya for 17 when he had him leg-before with a slider.

Rashid Khan then appeared in the stage and struck in his first over to break the defense of Liton with a quicker delivery. Liton hit three fours and one six in his 33 off 66. 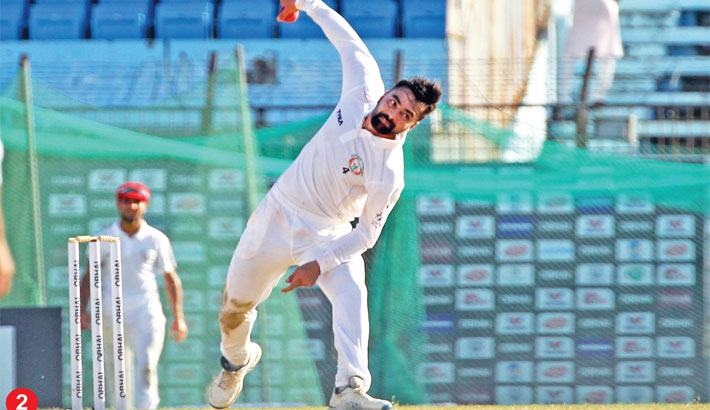 And thereafter Rashid was relentless. He got his opposite number Shakib Al Hasan for 11 with a traditional leg-break.

And one ball later, he had Mushfiqur Rahim caught by wicket-keeper Ibrahim Zadran for two ball-duck.

The video footage didn’t give any conclusive decision that if the ball hit the ground or his boot before touching his bat to go to wicket-keeper. Umpire however gave a soft signal and the third umpire retained it.

Mahmudullah was undone by a delivery of Rashid for 7 that kept low.

Mominul Haque, considered as the Test specialist, held the one end, amid the wicket’s falling around him.

He brought up his 13th fifty with a powerful stroke for four through mid-on but shortly after that he holed out one-off Nabi to be dismissed.

Leg-spinner Qais Ahmed removed Mehedi Hasan for his maiden wicket before Mosaddek and Taijul Islam came up with some sort of resistance.

They combined for a 48-run for the ninth wicket, the highest for Bangladesh in any wicket in the innings.

Taijul did his job in bowling too, finishing with 4-116.

He took the wicket of set batsman Asghar Afghan for 92 and Afsar Zazai for 41 to help Bangladesh start the day with commanding fashion after Afghanistan resumed with 271-5.

Rashid then hit 51 off 61 with two fours and three sixes to keep the side in good stead.