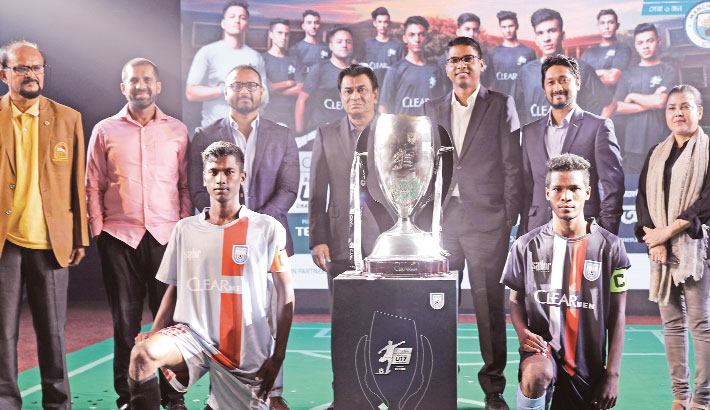 The second season of the ‘Clear Men Bangladesh Under-17 Championship 2019’ is going to be started from September 15, 2019.

A total of 272 school teams from around the country will take part in the biggest football event.

The main ambition of this tournament is to bring the talented footballers into the lime light and take the players and their school teams to national level as well as increase the craze around football.

The best schools teams from whole country will compete in this football competition. The top 16 winning teams will face each other in the final round in Dhaka. The best 36 footballers from the tournament will get the chance to join a boot camp with Bangladesh Football Federation (BFF). Amongst them, 6 best players of the tournament will get a chance to be coached by England’s world famous football club- Manchester City’s coach. They will also get a chance to experience a match in the club’s home-ground.

A press conference was held in this regard at Dhaka city’s Le Meridien hotel on Thursday whereas the officially announcement of this year’s tournament was declared.

Boys aged under the age of 17 can register with their school teams. To register, they will need to submit the team’s contact person’s name, address, and mobile phone number and the tournament’s organizers will contact them to complete their registration. This national level tournament, “Clear Men Bangladesh U-17 Championship”, wishes to influence the young footballers all around Bangladesh.

On behalf of Unilever Bangladesh, Nafees Anwar said, “We first started Clear Men Bangladesh U-17 Championship in 2018 with a great response from different schools teams all around the country. More than 2500 potential football players were able to showcase their talent through this tournament. We were very inspired by the success of last year’s tournament, thus we are really pleased to arrange this tournament for the second time in collaboration with Bangladesh Football Federation (BFF). We hope to discover more talented players through this tournament”.