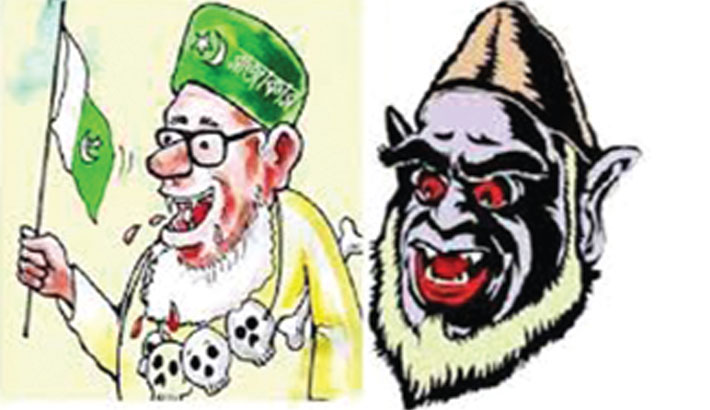 The government has started the process to list “Raszakars” or “traitors” of Bangladesh’s 1971 Independence War, nearly 50 years after achieving freedom, and the move has been welcomed by the families of martyrs.

The Razakar force was organised into brigades of around 3000–4000 volunteers, mainly armed with light Infantry weapons provided by the Pakistani Army. Their main function was to arrest and detain nationalist Bengalis. The targetted Bengalis  were tortured during custody and killed. The organisations were later accused of having violated Geneva Conventions of War by raping, murdering and looting the locals.

The task would have to find the list of “Razakars” made during the war by the Pakistani army, while some have fled the country soon after the war ended or in the following years. Media reports have alleged that many have “changed their colour” and hiding by wearing the mask of pro-independence elements.

SM Arifur Rahman, Secretary Ministry of Liberation War Affairs, told the daily sun that “The process to list the Razakars has started and it is in its initial stage.”

“It is not an easy task and thus difficult to say when the final list will be published, but we are trying to finish it as soon as possible,” he said.

Rahman said “Out of 12 volumes of 1971 war history books with the Home Ministry, we have finished work on three volumes. We have to cross check all the information and then digitalise  ... the admin wing is currently working on our ministry is doing the work.”

The ministry has asked chiefs of all the 64 Bangladeshi districts to send their inputs after verifying information they have or would get during the process , said the ministry’s top bureaucrat.

Asked what would happen to those Razakars after the list was completed, he said it would all be decided by the government as per laws laid down for war crimes.

The East Pakistan Razakar Ordinance promulgated on 1 June 1971 by the Governor of East Pakistan, Lieutenant General Tikka Khan known as the “Buther of Bengal.” The Ordinance stipulated the creation of a voluntary force to be trained and equipped by the Provincial Government. This was to add to the government's forces to suppress the rebellion of people who wanted independence for the region. It is also alleged that Razakars were recruited by the Shanti Committee, which was formed by several Bengali speaking pro-Pakistani leaders.

The Razakars had two branches they were Al-Badr and Al-Shams paramilitary forces.[Students from Madrasahs were inducted into Al-Badr for specialised operations while Al-Shams was tasked with protection of important strategic locations. The Razakar were under Pakistani Army command and also trained by them.

Magnitude of the crimes of the Razakars has prompted Awami League government led by Father of the Nation Bangabandhu Sheikh Mujibur Rahman’s daughter and Prime Minister Sheikh Hasina to make a list of such culprits.

Meanwhile, families of martyrs of the 1971 war welcomed the government move, even after nearly 50 years of independence from Pakistan, came after a decision by the standing committee on the Liberation War Affairs Ministry recently and debates on the issue of listing.

“It is a very good initiative and they must be brought to justice, even if the crime is not very serious,” she said.

Meghna Guhothakurta demanded that a list of martyred intellectuals must be made and published as there were many across Bangladesh who have not been recognised and honoured duly.

“I am delighted that finally those who fought against Bangladesh in 1971 and are still taking sides with Pakistan will be brought to justice ... they must be weeded out from the government for the sake of our country  ... they or their children should not be given government jobs,” said businessman Mizan Talukder, son of martyr Professor Abdul Wahab Talukder.

Mizan said the anti-liberation forces and razakars got back their strenghth under the patronisation of opposition Bangladesh Nationalist Party and the fundamentalist Jamaate-e-Islami.

BNP’s founder slain General Ziaur Rahman liftede a ban on Jamaat after seizing power following the killing of Bangabandhu Sheikh Mujibur Rahjman and rehabilitated war criminals as well as pro-Pakistani elements. His widow, Begum Khaelda Zia, made two Jamaat leaders members of her cabinet and both were executed after being convicted by War Crimes Tribunal.