A Breakthrough In Our Health Sector 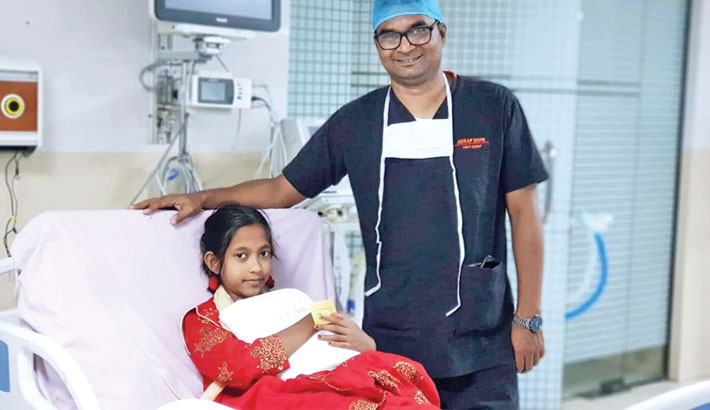 There is a common perception among cross-sections of people that if you want to be treated well, you must seek medical help abroad. Especially when it comes to undergoing complicated heart surgeries, people always prefer doctors practicing outside our country. However one doctor is striving hard to make the difference with a view to instilling the confidence into our health service seekers. He is Dr Asraful Hoque Sium, the youngest cardiac surgeon of South Asia who is working as an Assistant Professor in the Department of Cardiac Surgery at National Institute of Cardiovascular Diseases (NICVD). Of late, he has touched another milestone by conducting a cardiac surgery on a 12-year-old girl named Nupur following the latest technique known as ‘Minimally Invasive Cardiac Surgery’ (MICS).

Dr Sium, accompanied by chief cardiac surgeon of NHFB Prof Dr Farooque Ahmed and Associate Professor Dr Prasanta Kumar Chanda, led a team of ten cardiac surgeons who had successfully completed the minimally invasive cardiac surgery, first of its kind at a public hospital in the country, on August 25 which took just two and a half hours. Hailing from Sujanagar upazila in Pabna district, the patient Nupur, daughter of Mijanur, a handloom worker, was suffering from Atrial Septal Defect (ASD) - a hole in the wall between the two upper chambers of heart. However she returned home on August 29 after the successful surgery.

As far as the method is concerned, MICS (Minimally Invasive Cardiac Surgery) is the most recent technique used in treating heart diseases and performed through small incisions, sometimes using specialized surgical instruments. According to the health experts, surgeons using this technique do not cut through the breast-bone, rather they operate between the ribs, which allows surgeons to use techniques that limit the size and number of cuts, or incisions that they need to make. It is typically considered safer and quicker than a traditional open heart surgery.

After accomplishing this phenomenal job, Dr Sium could not hold back his emotions and consequently shared with this writer, “I am speechless! I used to dream big for the people. With the support of the honorable Prime Minister (Sheikh Hasina), I’ve been able to materialize such a dream. I’m very happy and thankful to all.” However he has also admitted that the journey was not so smooth as he had to face some challenges. He went on to say, “There were some issues, including funding and approval from the higher authorities, which needed to be addressed. The prime minister’s directives in this regard made things easier for us. She encouraged us to go ahead and ensured all kinds of support necessary for this job to be done fruitfully.”

Well, regular practice of such a technique/method may open up new possibilities in our health sector as this process offers many benefits. Firstly, the cost for such operation is low (in case of the NICVD, each patient occupying a paying bed has to spend only around Tk 5,000 for the operation) compared to that of traditional open heart surgery, which may benefit the poor patients to a great extent. Secondly, it reduces post-operative discomfort, quickens healing times and lowers risk of infections as well as eliminates the possibility for deep sterna wound infection.

Because of so many advantages this kind of method offers Dr Sium has expressed his hope that the NICVD would operate this kind of surgery regularly as the essential equipments are available here. They will train up other surgeons to that end. “Step by step, we will carry out operations not only for hole in the heart but also to treat heart valve, block surgery and bypass surgery, with the help of the MICS system within the next six months. We have to produce a trained team and need necessary logistic support to carry out such surgery on a large scale,” he said.

To conclude, it is the doctors like Sium who can bring about some significant changes in our health sector. Dr Sium not only worked hard to pull off this surgery but also sacrificed a lot to achieve the target. He along with his two colleagues even travelled to India on their own just to gather more knowledge on the ways to carry out such a delicate surgery. If all the stakeholders related to the health sector work being inspired by the level of dedication exhibited by Dr Sium, then that day is not far when we will not have to go abroad for meeting up our medical necessities.