U-19 team aim to carry England form to Asia Cup 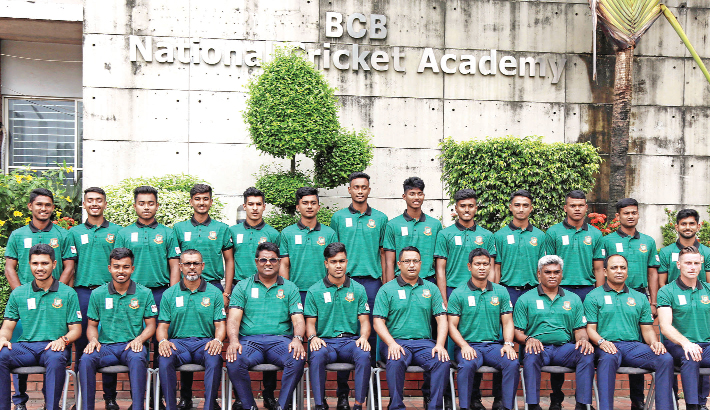 Players of Bangladesh Under-19 National Cricket Team pose for a photograph at the BCB National Cricket Academy in Mirpur on Monday before departing for Sri Lanka to participate in the upcoming edition of Under-19 Asia Cup. – SUN Photo

Bangladesh Under-19 National Cricket Team skipper Akbar Ali said on Sunday that they are taking inspiration from their just-concluded England tour as they prepare for the upcoming edition of Under-19 Asia Cup.

Junior Tigers left Dhaka on Sunday to take part in the Asia Cup, scheduled to be held in Sri Lanka from September 5-14.

Prior to the tournament, Bangladesh played a tri-nation in England that also featured India and went to the final at the expense of the hosts before failing to beat the eventual winner India in the important game.

“It was a special achievement to defeat India and England in England. We can use that this experience in Asia Cup, in the next series and even in the World Cup too,” Akbar told Daily Sun on Monday.

“We just lost the final in England series. Except that final, we played well in the tournament. We went to the final leading the table but we lost in the final. We had a very successful tour in batting, bowling and fielding,” he said adding that they are well aware that spin will be vital in Sri Lanka.

“Of course, Sri Lanka have a different condition. We might have a spin wicket there. We have worked on our spin for Asia Cup. I hope who will get their chance, can show their potential,” he said keeping his confidence on the spin trio of Rakibul-Siyam and Mijanur.

Towhid Hridoy, who was the second-highest scorer in the tournament making 320 runs that includes an unbeaten century and two half-century with a staggering average of 80 runs also echoed the same sentiment.

“England series was very good for us. Though, we could not achieve our goals finally. It was a disappointing final for us. If we could have won the final than it would have been better,” said Towhid.

“It was a tough condition for us. We played there. I personally feel Sri Lanka series will be much easier than England,” he said.

“Every cricketer batted and bowled well in England and we are pretty confident. I believe we could use these experiences in Asia Cup,” he said.

Bangladesh Under-19 coach Naved Newaz said that though they have done pretty well in England but still they have some work in hand ahead of the ICC Under-19 World Cup.

Junior Tigers are expected to tour New Zealand after completing a stint in the Asia Cup and according to the Sri Lankan head coach they are trying to make sure they are well prepared before the World Cup by trying out all their options in the upcoming months.

“I think in England boys played pretty well. Most of the things we did right we prepared for that tour for a long time. Looking for that tour from January last year preparation of wicket and how we train. We did pretty well the boys responded to the training method. The boys showed us a good result but it was disappointed in the final to lose. I strongly believe we have a good side and could have beaten India in the final. The batting collapse in the middle order cost us around 25-30 run short and we lost the final,” Newaz told daily sun at academy premises on Sunday.

“We are more or less got a good blend. We are still trying to sort out some combination issue with the side in terms of batting bowling. Whether we are playing seven batsmen or six batsmen with the all-rounder some of those areas are still not satisfied. It could improve in the next couple of months and hopefully we will ready by December,” he said.

“There are few issue and concern with the pace bowling. I expected them to do well with the change of condition which was suited for the fast bowler. Comparing with Bangladeshi wickets, the pace bowler will enjoy the pace bounce and weather of England because they are conducive to fast bowling. I think we could improve in death bowling. That’s one area we are focusing on. We have made some mistake in most of the matches in the last 15 overs,” he added pointing out the importance of pace bowling unit as the next edition of the tournament is scheduled in South Africa, known to be a paradise for young fast bowlers.