I am not overconfident, says Nayeem 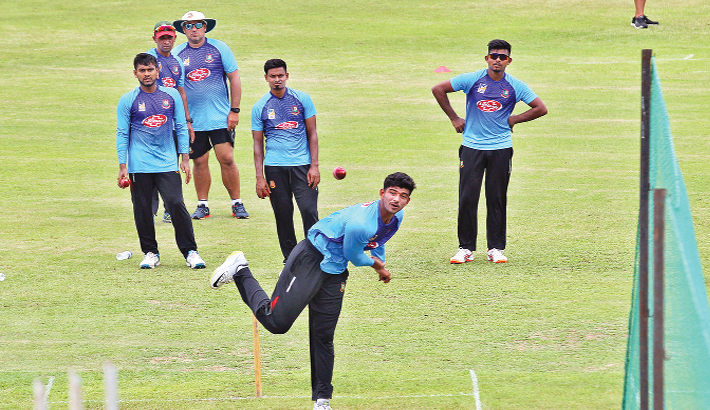 Bangladesh spinner Nayeem Hasan bowls as his teammates look on during a training session at the Zahur Ahmed Chowdhury Stadium in Chattagram on Monday. – Rabin Chowdhury

Bangladesh National Cricket Team off-spinner Nayeem Hasan is quite confident that he can carry his HP team form to the national team when Bangladesh take on Afghanistan in the one-off Test match, starting from September 5.

Bangladesh have started their preparation at his home ground Zahur Ahmed Chowdhury Stadium in Chattagram.

Nayeem, while playing for Bangladesh HP, had taken seven wickets against Sri Lanka Emerging Team in a recently concluded four-day match and thereby oozed with confidence.

“But I am not overconfident. When a player scores run or take a wicket, he naturally feels confident. Going into the Test, the form matters,” Nayeem told the reporters in Chattagram on Monday.

Nayeem, the only player from Chattagram after Tamim Iqbal took a break from the series, is upbeat that he could play his part well if he gets chance in the team.

In the last two-years, Bangladesh however played four spinners in Shakib Al Hasan, Mehedi Hasan Miraz, Taijul Islam and Nayeem Hasan in home Test in a bid to outclass the opponent with extreme spin.

Nayeem proved him fit into the illustrious club of spinners, taking a five-for in his debut Test against West Indies last year. And chances are very high that the team management would ponder him once again in a bid to form a four-pronged spin attack to give him another chance to make an impact in front of his local crowd.

“Tamim is taking and there’s nothing like that he is not in the team. Yes now I am the only representative from Chattagram but it doesn’t matter. Just it’s a good feeling to play in front of the local crowd,” said Nayeem.

Nayeem said maintaining the process as per the guideline of the team management will be the key in the Test against Afghanistan.

“I don’t know yet what the plan is but before the game, the team management will inform about it. Whatever it is, the important thing is to maintain the process,” he said.

Nayeem added that he is ready to take the challenge of Afghanistan in the one-off Test match as he makes him completely prepared for them by bowling against Shakib Al Hasan and Mushfiqur Rahim.

According to the youngster bowling against those two stalwarts of Bangladesh in the practice game that the players in the conditioning camp played split into two groups gave him the much confidence ahead of the Test because they are great player against spin.

“They (Mushfiqur and Shakib) are the good players of spin. So bowling against them is always challenging. They are world-class cricketers and if I bowl well against them, I always get the confidence,” he informed.

Chattagram is his home ground where he made a huge impact in his debut Test, claiming 5-61 against West Indies.

Nayeem however believes he can make such impact once again if he gets chance. But with three leading spinners –Shakib Al Hasan, Taijul Islam and Mehedi Hasan Miraz in the team, Nayeem’s chance to bowl more overs remains unlikely as was the case in the last two Test matches.

But Nayeem said he is okay with it and at the same time he tries to hone his skill with batting too.

“Whenever I get a chance to bat, I tell myself that I am a batsman. I always bat with that mindset,” concluded.