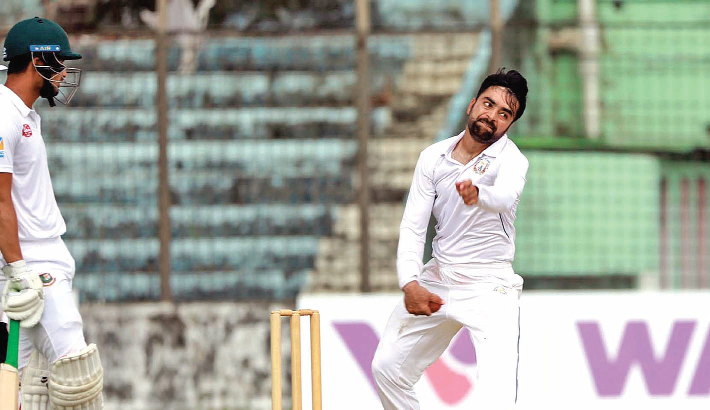 Afghanistan skipper Rashid Khan bowls against BCB XI during the day two of their two-day practice match at the MA Aziz Stadium in Chattagram on Monday. – BCB Photo

Afghanistan warned Bangladesh that they are ready to play with fire if the host have any plan to dismantle Afghanistan with their spin web as like they did in the past against the touring side as Rashid Khan and his spinners tore apart BCB XI, showing an intriguing display of spin bowling in two-day practice game which predictably ended in a draw at the MA Aziz Stadium in Chattagram on Monday.

Afghanistan gained the psychological edge, having dismissed BCB XI for just 123 runs with spinners-skipper Rashid Khan himself and left-arm spinner Zahir Khan sharing eight wickets between them before the match settled for a draw.

Bangladesh announced a Test team, comprising mostly with spinners, indicating that they would keep up the trend of fielding four-pronged spin attack. But Afghan spinners’ performance in practice match was a treat to watch.

The 20-year old Zahir Khan who is yet to make his Test debut was particularly impressive, claiming 5-24, that broke the spine of BCB XI batsmen. Rashid Khan grabbed 3-26 with his leg-spin. The rest of the two wickets went to two pacers-Shapoor Zadran and Syed Shirzad. Another spinner Mohammad Nabi went wicket-less but created pressure with tight bowling.

However, Afghanistan didn’t use much another leg-spinner Qais Ahmed, considered as next big thing of Afghanistan. Qais Ahmed mauled Bangladesh A, comprised of several national players, in four-day matches when Afghanistan A toured this country in July. But in this practice game, Qais bowled just two overs. Al-Amin Hossain was the highest scorer for BCB XI with 29 runs while opener Anamul Haque Bijoy made 19.

Earlier resuming the day on 242-6, Afghanistan piled up 289-9 before declaring their innings. Their openers Ihsanullah and Ibrahim Zadran showed much patience in the wickets and scored 62 and 52 runs respectively. Mohammad Nabi scored 33 while Hasmatullah Shahidi made 26. Qais Ahmed was unbeaten on 23. Afghanistan will take on Bangladesh in one-off Test match, starting from September 5 at the Zahur Ahmed Chowdhury Stadium.

Afghan bowler Zahir said that he is excited with the prospect of bowling with two seasoned campaigners Rashid Khan and Mohammad Nabi.

“Yes, as you see we got very good spinners like Rashid Khan, Mohammad Nabi and me. And I’m very confident that we will bowl very well and people will enjoy the game,” Zahir said.

“I’m very excited. This is a very good chance for me. Bangladesh are the number eight team in international cricket. I will be so happy to play this match. This is the second time in Bangladesh. It was a good preparation for the Test match,” he said.

Zahir added that he is a chinaman bowler and not a medium pacer despite he takes long run-up.

“I started my bowling with same run-up since his early days. I’m a chinaman. And I can control my pace. This is very good pace as a spinner,” he concluded.