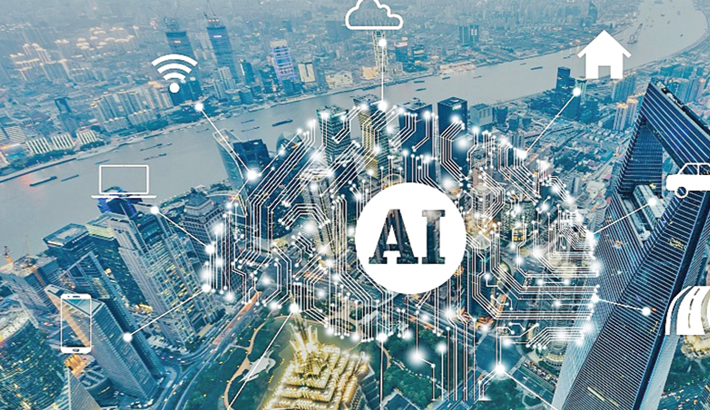 World Artificial Intelligence Conference (WAIC) ended on Saturday in the east China metropolic Shanghai has provided exhibition-goers with a glimpse.

Artificial intelligence, the ability of a computer or computer-controlled robot to perform tasks commonly associated with intelligent beings. The term is frequently applied to the project of developing systems with the ability to reason, discover meaning, generalize, or learn from past experiences.

A dozen of forums were held during the conference, with scientists and entrepreneurs discussing algorithms, brain-inspired intelligence technology, AI chips and AI robots, among which the dialogue between Tesla founder Elon Musk and Alibaba founder Jack Ma garnered the greatest attention.

At the innovative application area, 300 companies from around the world presented their latest AI products. One of them helps streamline the process of 3D modeling, whereby game developers can get 3D figures simply by drawing on a tablet.

"We have collected many items in different shapes and drafted them out, matching up the draft with real items to train an AI model. The product is designed for designers or people who work in art industry to create game characters," said Pan Hao, an exhibitor.

After a user types in a brief description, a painting application utilizing AI technology can create an oil painting in three minutes based on artworks of over 200 masters throughout history. This is enabled by machine learning, which allows a computing device to predict outcomes without being explicitly programmed.

Waving a hand or making a gesture, exhibition-goers can see the shadow of their hands turn into vivid characters for a shadow puppet show based on the "The Legend of The White Snake," one of four greatest Chinese folktales.

"Shadow puppetry is one of China's intangible cultural heritages. We hope traditional Chinese culture can be showcased through machine learning and other innovative methods," said Zhu Shuainan, another exhibitor.

A garbage classification monitoring system at the exhibition not only identifies people who throw away garbage, but also identifies the type of garbage. Meanwhile, the overflow of trash cans can be monitored in real time.

A real-time fire hazard warning system on display can quickly trace the source of fire and smoke by intelligent video thermal imaging technology. Portable and intelligent medical equipment is another eye-grabber. He Chuan, an exhibitor of such equipment, introduced that with portable medical equipment with AI, doctors could offer patients in rural remote areas with poor medical infrastructure with services of first-class hospitals in big cities.

"The intelligent equipment has been applied in 97 percent of the pilot villages, and the cost has been reduced by 30 percent," he said.

During the conference, the investors have announced an artificial intelligence talent plan recruiting leading researcher under the age of 30.

The Class A Project was proposed by founders and scientists of 20 AI startup companies, with an aim of fostering the next generation of local AI talent through collaboration of industry and academia, financial services and other initiatives.

With an average of 26, the group covers a wide range of AI research themes such as computing vision, natural language processing, machine learning, robots and data mining.

"It is very dangerous if an enterprise operates purely as a lab that lacks effective exposure to the market," Zhu, chief executive of CraiditX Technology, added.

"Technology should look for clients, occupy the market and generate productivity. Key to productivity is talent, who need proper guidance and talent scouts."

Focusing on research and development in AI field, Shanghai Jiaotong University Computer Science and Engineering Prof  Lu Cewu said the industry is in severe demand of two types of talent: scientists with the ability for fundamental research that can lead to original breakthroughs, as well as those who are able to translate these ideas into pragmatic product designs.

He said AI courses in universities are conducive to filling the gap for application-focused talent, but it may take longer to nurture researcher-oriented talent, who can pioneer in genuine technology breakthroughs.

Dubbed the Nobel Prize in the AI industry, the Super AI Leader award represents not only the topmost honor at the World Artificial Intelligence Conference but also the highest official award in the AI industry in China.

The 2019 World Artificial Intelligence Conference, held in Shanghai from Aug 29 to 31, has attracted over 500 international and domestic industrial leaders, including Alibaba founder Jack Ma and Tesla CEO Elon Musk.