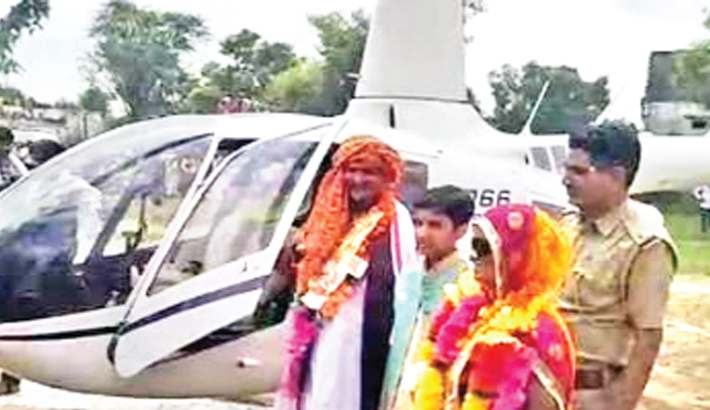 A government school teacher in Rajasthan’s Alwar district, who retired on Saturday, gifted himself and his wife a chopper ride from the school to his village, which is 22 km away.

Ramesh Chand Meena, who was a social science teacher at the government senior secondary school in Saurai, Lakshmangarh, booked the helicopter to fulfil his wife’s dream of flying in a helicopter. When villagers came to know about it, a large crowd gathered near the helipad to witness the scene, reports Hindustan Times.

Meena said that the idea of the chopper ride came to him after his wife, upon seeing a helicopter, asked him how they could fly in a helicopter like that.

Right before the ride, his wife said that she was very thrilled and excited about flying in the helicopter.

He booked the chopper from a private company in Delhi after paying Rs. 3.7 lakh including the charges for the construction of the helipad at Saurai.  He had also taken all the required permission from the local administration and the police in advance.

The school organized a ceremonial farewell for Meena and tied a turban round his head and garlanded him. Post the ceremony, the villagers took Meena and his wife to the helipad amid drum beats and bursting of firecrackers.

Upon reaching Malavali, the chopper circled the village and showered flower petals on the villagers, who were waiting to receive Meena and his wife.