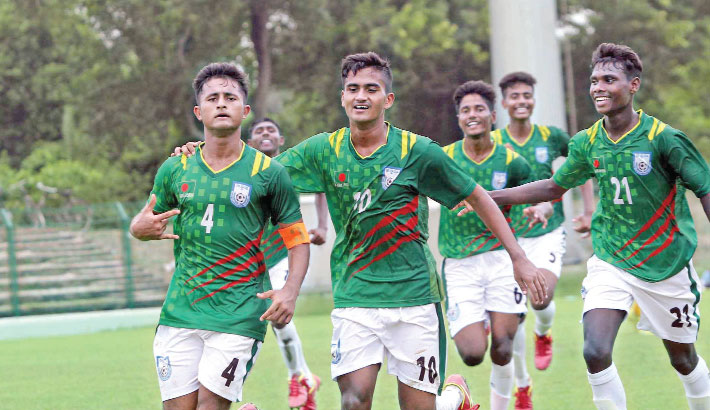 Players of Bangladesh U-15 National Football Team celebrate after scoring a goal against Sri Lanka during their second match of the five-nation SAFF Under-15 Championship at the Kalyani Stadium in Nadia District of West Bengal on Sunday. Bangladesh won 7-1. — BFF Photo

Five goals by forward Md Al Amin Rahman enabled two-time champions Bangladesh to pile up massive 7-1 goals victory over Sri Lanka in their second match of the five-nation SAFF Under-15 Championship at the Kalyani Stadium in Nadia District of West Bengal on Sunday.

In the goal-fest match, Bangladesh started put pressure on their opponent within the opening minute.

Just before the half time, Al Amin scored his second goal of the match in the 44th minute (3-0).

Forward Al Mirad, who scored twice in the first match against Bhutan, widened the margin for Bangladesh scoring a goal in the 48th minute (4-0).

After that, Bangladesh continued their attacking brand of football.

In the 59th minute, Al Amin Rahman completed the very first hat-trick of the tournament scoring his third goal (5-1).

Sri Lanka tried hard but failed to comeback in the game. Al Amin sealed the win for Bangladesh scoring his fourth and fifth goals in the 66th and 71st minutes respectively (7-1).

In his immediate reaction, the forward from Naogaon said, “I am happy that I have scored five goals today (Sunday). Also, I feel proud that I have done something for Bangladesh team.”

Earlier, defending champions Bangladesh made a flying start in the ongoing South Asian Junior soccer meet crushing Bhutan by 5-2 goals in their first match at the same venue on August 23.

In the remaining league basis matches, Bangladesh will play Nepal on August 27 and hosts India on August 29 at the same venue.

Two top teams of the league basis matches will advance to the final on August 31.