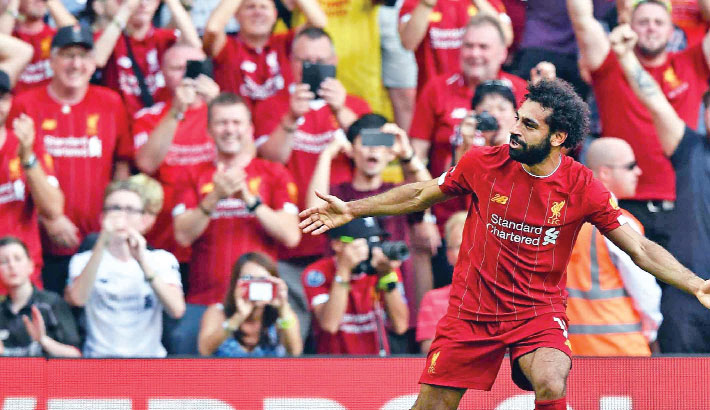 Liverpool extended their perfect start to the Premier League season as Mohamed Salah inspired an impressive 3-1 win over Arsenal, while Manchester United suffered fresh penalty woe through Marcus Rashford in their shock home defeat against Crystal Palace on Saturday.

Jurgen Klopp’s title challengers made it three successive victories thanks to Joel Matip’s opener and a brace from Salah, one a stunning solo effort.

And Arsenal were guilty of another needless error four minutes after half-time when former Chelsea defender David Luiz tugged at Salah, conceding a penalty that the Egypt forward drove home for his second goal of the season. Salah put talk of Arsenal’s revival in perspective when he accelerated away from Luiz and Nacho Monreal before finishing off a superb solo strike in the 59th minute.

Lucas Torreira got one back in the 85th minute, but it was too late for an Arsenal escape act. On Monday, Manchester United were forced to settle for a 1-1 draw at Wolves after Paul Pogba’s penalty was saved by Rui Patricio when the France star insisted on taking over spot-kick duties from Rashford.

But Rashford fared no better when he hit a post from the spot in the second half against Palace at Old Trafford, putting United on course for their first defeat of the Premier League season as Patrick van Aanholt grabbed the visitors a 2-1 win in stoppage-time.

Palace took the lead in the 32nd minute as Jeffrey Schlupp flicked on to Jordan Ayew, who was played onside by the slow-to-react Harry Maguire and side-footed past David de Gea for Palace’s first goal of the season.

When Scott McTominay was fouled, Rashford, who had scored a penalty against Chelsea in the first game of the campaign, took the ball as Pogba looked on, but the England striker’s spot-kick cannoned back off the woodwork.

Former Swansea midfielder Daniel James looked to have spared Rashford’s blushes when he bagged his second goal for United with a fine finish in the 89th minute.

But a terrible blunder by United ‘keeper De Gea proved decisive in the third minute of added time as the Spaniard allowed van Aanholt’s shot to squeeze under him at the near post.

Leicester got their first victory of the campaign as they beat Sheffield United 2-1 at Bramall Lane.