Shakib gets into Test-mode 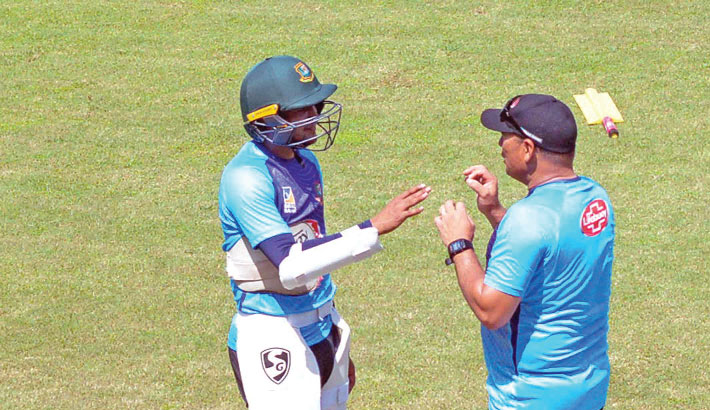 Bangladesh National Cricket Team Test and T20I skipper Shakib Al Hasan goes into Test-mode. The way he is preparing for the upcoming one-match Test series against Afghanistan only suggest of one simple thing- switching gears.

Shakib joined the national preparation camp on Saturday hours after he arrived from USA after completing his vacation and since then looked to be totally focused on his batting and making plans with the newly appointed national head coach Russell Domingo.

Bangladesh ace all-rounder skipped the recent tour of Sri Lanka citing fatigue after his remarkable performance in the World Cup and instead opted to have some time with his family to energise his battery.

Shakib was in exceptional form in the World Cup as he ended with 606 runs at an average of 86.57 and also picked up 11 wickets that include two centuries and five half-centuries but later admitted he was exhausted in the last two games respectively against India and Pakistan.

Shakib, who is the first cricketer of Bangladesh advocating the rotation policy and suggesting the need of proper rest returned home with a fresh pair of legs after the vacation that also included his time to complete his Hajj.

The arrival of Shakib can surely be some sort of relief for Domingo as he took over the control from the strength and conditioning trainer Mario Villavarayan after the team had a week-long conditioning camp.

According to the training programme of Bangladesh, the ongoing week training schedule is filled with fielding and skill training and while the rest of his teammates are honing the fielding skill, Shakib opted only to bat.

The importance of need-based training is growing stronger with each passing days but Shakib seemed to the perfect example of someone taking it seriously than others.

Ahead of the World Cup, Shakib decided to call his coach Mohammad Salahuddin to India to utilise his time preparing for the mega event as he was not a regular for the Sunrisers Hyderabad in the Indian Premier League and the world had witnessed the outcome.

On Sunday, at the Sher-e-Bangla National Stadium in Mirpur, Shakib decided to bat at the center wicket in the morning for hours while his teammates were yet to start their practice session.

After completing the first part of the individual batting session in the nets Shakib decided to return to the dressing room to take some rest and during the time frame watch his teammates entering the field to complete their fielding drills.

Shakib decided to prolong his individual batting session by going back to the nets for the second time to get that feeling of hitting the ball through the middle of the bat considering he was out of cricket for quite some time and did that for half an hour before the training camp was called off for the lunch break.

After the lunch break, Shakib was seen having a long discussion with head coach Domingo before he was sent back to the nets to have his share of batting with other teammates.

The whole scenario only reflected the fact Shakib is getting his mindset ready for the longer formats where there will be breaks and he needs to adjust in the middle coming back from it without losing his concentration.

Former Bangladesh national team player-cum-current selector Habibul Bashar had seen Shakib’s transformation though years as he was the Bangladesh captain when the all-rounder was debuted against Zimbabwe in ODI’s in 2006.

According to Habibul what sets him apart from others is his ability to prioritize that includes his preparation as well along with other things and it is largely due to the fact he knows his game too well.

“I think he knows his game too well and tries to plan his preparation accordingly. Like now he is focusing on his batting because he is well aware that he needs to make sure no stone is unturned as far as his batting preparation is concerned,” Habibul told daily sun on Sunday.

“It will be the same with his bowling and fielding in the coming days but knowing what needs to be done is very important more so if he is all-rounder,” he said.

“He is someone who can switch his gears according to the demand of the format and that seemed to be working for him quite well and for quite some time,” he said.

“We have seen a lot of coaches coming to work with us but he is someone who knows what he wants to learn from the coach whether it’s tactical or technical and apply it accordingly,” he said referring to the long discussion between Domingo and Shakib.

Habibul added that he is very confident that Shakib will again shine in the upcoming days considering he still sees that hunger in his eyes.

“He is never satisfied and that is the basic difference between him and others. I have seen this hunger in his eyes from his early days and it still remains that way,” said Habibul.

“Probably that drives him and knowing that he needs to deliver against Afghanistan in the Test he is making sure that he is well prepared to take up the challenge,” Bangladesh selector concluded.

Bangladesh will play Afghanistan in a one-off Test series in Chittagong from September 5-9 and considering the port city is known to be batting paradise it looks to be the right move by Shakib to get down to business by putting his full emphasis on his batting for the time being.