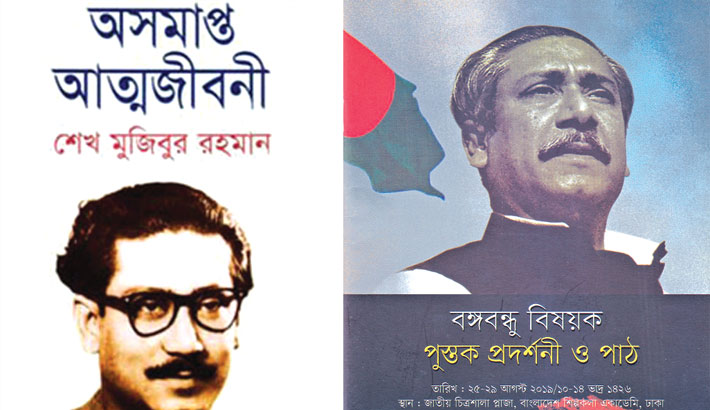 A five-day reading competition on Bangabandhu’s Unfinished Memoirs and a book exhibition on Father of the Nation Bangabandhu Sheikh Mujibur Rahman begun at the National Art Plaza of Bangladesh Shilpakala Academy in the capital on Sunday, reports BSS.

Marking the National Mourning Day and the 44th martyrdom anniversary of Bangabandhu, Academic and Creative Publishers Association of Bangladesh (ACPAB) and Bangladesh Pustak Prokashok O Bikreta Samity (BPPBS) are organising the competition under the auspice of the National Book Center with the help of Cultural Affairs Ministry.

Addressing the function, Abu Hena Mostofa Kamal said there is no alternative to practicing the history of Bangabandhu and the War of Liberation to foil the ongoing anti-state conspiracies. It should be started from the school level, he added.

The cultural affairs secretary said, “Bangabandhu and Bangladesh are identical. Bangladesh could have not emerged if Bangabandhu was not born”.

The defeated Pakistani collaborators, who could not accept the existence of Bangladesh and the War of Liberation in 1971, killed Bangabandhu along with his family members brutally on August 15, 1975, he added.

He urged the students to read Bangabandhu more and more to know the country’s real history.

A total of 50 students from five schools of Dhaka and Narayanganj are taking part in the competition which will continue till August 29.

State Minister for Cultural Affairs KM Khalid will address the closing ceremony as the chief guest and distribute prizes among the winners at the Experimental Theatre Hall of the Shilpakala Academy on August 29.