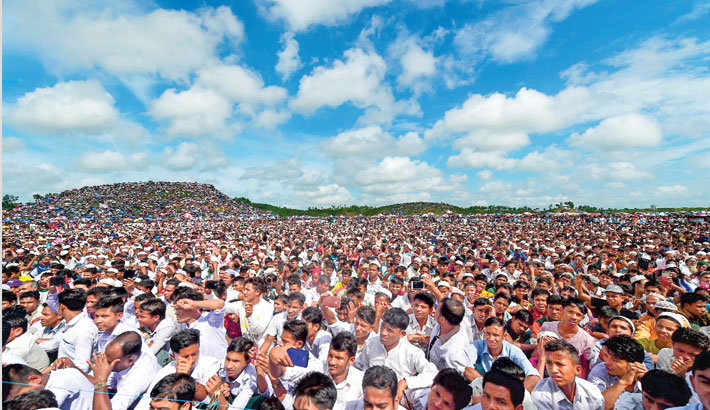 Rohingyas attend a ceremony organised to remember the second anniversary of a military crackdown that prompted a massive exodus of people from Myanmar to Bangladesh, at the Kutupalong camp in Ukhia, Cox’s Bazar on Sunday. — AFP

Bangladesh on Sunday binned Myanmar’s claim that the second attempt to repatriate Rohingyas to their homes was Dhaka’s fault and asked the neighbouring country to fulfill its obligations and commitments for the earliest peaceful solution of the crisis.

The Ministry of Foreign Affairs (MOFA) in a statement said accusing Bangladesh of non-cooperation in the repatriation effort by a party which was fully responsible for the protracted crisis was “baseless, ill-motivated and totally unacceptable.”

“It is Myanmar’s responsibility to create a conducive environment in Rakhine through decisive actions and to reduce trust-deficit of Rohingyas through appropriate measures including dissemination of authentic information as per the ground reality”, it said.

The non-commencement of repatriation due to unwillingness of the people concerned could therefore be attributed to the failure of the Government of Myanmar in fulfilling its obligations.

The Government of Bangladesh maintains its principled position of not preventing anyone, regardless of one’s ethnic and religious identity, who intends to return to Myanmar anytime.

The Government of Myanmar should seriously consider a comprehensive engagement of the international community in the creating of an environment conducive for their return as well as in the monitoring of repatriation and reintegration process in Myanmar, the statement said.

Unsubstantiated claims on the part of the Government of Myanmar are not going to contribute to repatriation, said MoFA statement adding that Myanmar must also assume its responsibility to encourage Rohingyas to opt for voluntary return by sharing authentic information with them in all possible ways.

“In fact, the Government of Myanmar needs to take decisive actions with demonstrable political will to reasonably address the core concerns of Rohingyas in line with the spirit and provisions of the bilateral instruments on repatriation and the recommendations of the ‘Advisory Commission on Rakhine State’ in order to create a conducive environment for return in northern Rakhine”, it added.

On the latest repatriation bid, the statement said all necessary arrangements from Bangladesh were in place for the repatriation, including security and logistics for voluntary return of the Rohingyas to northern Rakhine state of Myanmar.

“Unfortunately, none of the families interviewed agreed to return in the present circumstances, as they consider the security situation and overall environment in Rakhine not yet conducive for their return,” said the statement.

As per bilateral instruments on repatriation, the responsibility of encouraging the displaced people to opt for voluntary return lies entirely on Myanmar.

Bangladesh has been sheltering around 1.2 million Rohingya in Cox’s Bazar for the past two years.