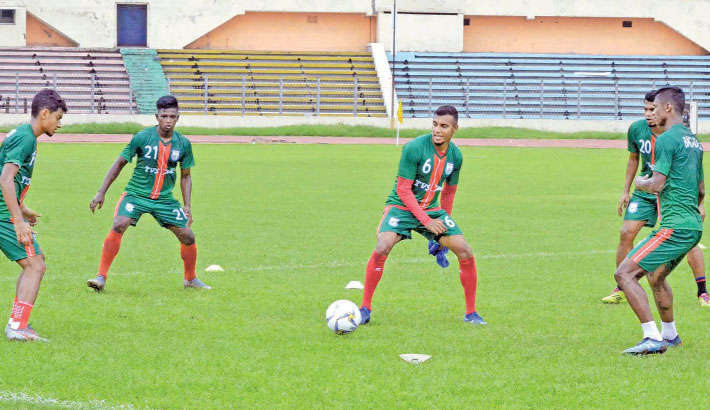 Bangladesh National Football Team booters practice on the opening day of the preparatory camp at Bangabandhu National Stadium in the capital on Saturday. — BFF PHOTO

With the reporting held on Friday and official training starting yesterday, the team will have a week-long camp in Dhaka before flying for Tajikistan on September 1 where they will train and play a couple of practice matches against the local top-flight clubs.

Bangladesh are going to kick off their joint qualification round with their match against Afghanistan at Dushanbe on September 10.

“I always prefer three goalies in the squad. The reason behind calling up Himel is that anyone can be injured at anytime. Himel is my personal favourite. I want to observe him in the camp till August 31 to so that I can select the best three goalies,” told Jamie.

With three weeks to go before the all-important match, The English coach also talked a bit about his plans for the upcoming weeks.

“In the first week we will work on fitness. We will also set our plans during this period. I am excited about the camp. We have some three weeks before our match against Afghanistan. In the second week I will focus more on the tactical aspect of the game,” said Jamie.

While Afghanistan is used to playing in artificial turf, Bangladesh might face a bit of a challenge in this regard but Day felt that Bangladesh booters will be able to overcome this challenge.