T-Aman farming goes on in full swing in Gaibandha 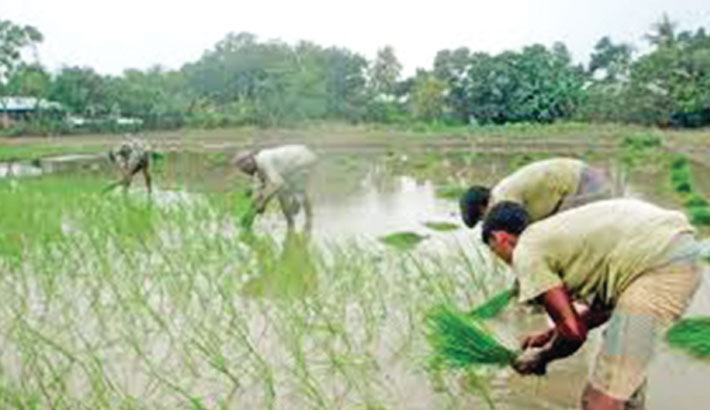 GAIBANDHA: Farming of T-Aman paddy, a high value crop, has been progressing fast in all the seven upazilas of the district since July amid much enthusiasm to the farmers.

Office sources said Department of Agriculture Extension (DAE) has set a target to bring a total of 1,23,067 hectares (9,23, 002 bighas) of land under T-Aman paddy cultivation this year with the production target of 3,56.894 tonnes of clean rice, reports BSS.

Meanwhile, as many as 81,500 hectares of land of the district were farmed T-Aman paddy till August 23 and the rest land would be brought under the farming with in September 08, said an official of the DAE.

To bring the land under the farming of T-Aman paddy the farmers of the district have already prepared seedbed where the seedlings have grown well, he also said.

Earlier, to make the farming programme a grand success, Bangladesh Agricultural Development Corporation and its approved dealers distributed high quality Aman seed to the farmers of the district at fair prices.

Besides, different state run commercial banks including Rajshahi Krishi Unnayan Bank have taken initiatives to disburse agri loans on easy terms to the poor and marginal farmers to help them cultivate the T-Aman paddy on their land without economic hardship, said a bank official.

In addition, DAE has been conducting training for the farmers for adopting modern technologies of paddy cultivation, crop management, judicious use of fertilizer and preservation of quality seed, said Showkat Osman, district training officer of DAE.

To ensure the production of T-Aman paddy in the district this year, BMDA has also kept its electricity run 505 deep tube wells fully ready to supply irrigation water to the Aman paddy field, if necessary, said executive engineer Azazul Islam.

Talking to the BSS, deputy director (DD) of DAE Dr. SM Ferdous said over 80 percent farming had already been completed and the rest would be finished by first week of September.

Necessary measures had been taken for availability of fertilizers, insecticides and other agri-inputs at the grass root level of the district during the current season, the DD concluded.