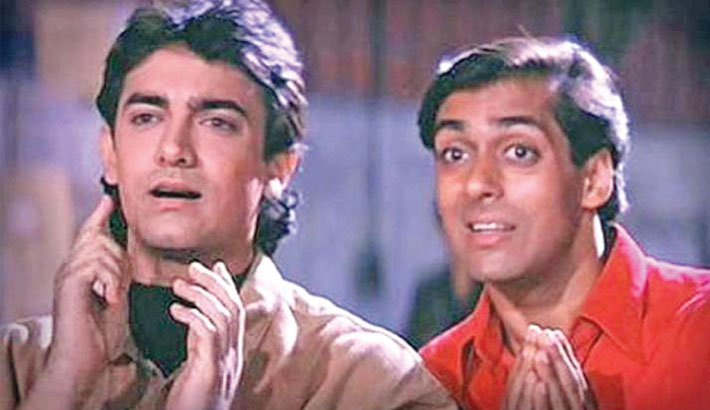 Andaz Apna Apna that had Salman Khan, Aamir Khan, Raveena Tandon and Karisma Kapoor in the lead roles is a classic cult. Since the past few years, the rumour mills have been abuzz with the sequel to this film, and several actors’ names from the younger generation have also been put up. However, the film has been on the back burner as the makers couldn’t zero down on the male leads to reprise Aamir and Salman’s role, reports Mid-day.

A report in Deccan Chronicle states that the sequel’s writer, Dilip Shukla stressed on the fact that they won’t do Andaz Apna Apna 2 without Salman Khan as Prem and Aamir Khan as Amar. Dilip Shukla confirmed that the sequel is happening as producer Vijay Sinha’s daughter Preeti Sinha asked him to start penning down the sequel. He explained, “I am writing the sequel. It is not easy to pen a sequel. I have to bring something more attractive in comparison to the earlier one.”

When he was asked if this film will get Aamir Khan and Salman Khan together on the big screens, Dilip Shukla explained, “The sequel cannot be complete without Salman Khan and Aamir Khan. They will be there along with three other new cast members.”

However, in an earlier conversation with Pinkvilla, a trade source had revealed that Varun Dhawan and Ranveer Singh had been approached for the film. Speaking further, the source had said, “Andaz Apna Apna reloaded a big film and the makers are treading cautiously as they want to finalise everything before making an announcement. Ranveer and Varun, have been approached for their comic flair to play Amar and Prem – who again will be happy-go-lucky characters but not the same ones we saw in the 1994 movie. Both are good friends off-screen and will be able to carry off their roles with ease. This will be set in 2019 and promises to be another laugh riot yet with underlying emotions. while the iconic character of Crime Master Gogo (played by Shakti Kapoor earlier) will also make a comeback with a contemporary actor and his character will be more stylised and modern.” Well, let’s wait for the film’s cast to be announced.