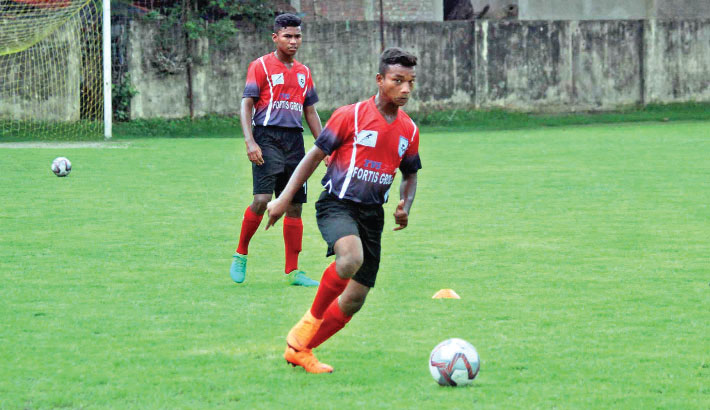 Players of Bangladesh U-15 National Football Team stretch during a training session at Kalyani Stadium in Kolkata, India on Thursday. — BFF Photo

Defending champions Bangladesh U-15 National Football Team will take on Bhutan in their opening match of the SAFF U-15 Championship scheduled to be held today at Kalyani Stadium in Kolkata.

Five of the South Asian countries are taking part in the regional championship.

The five participating teams – defending champions Bangladesh, India, Nepal, Bhutan and Sri Lanka — are playing in the round-robin format from where the top two teams will advance into the final slated for August 31.

The two times champions Bangladesh, who beat Pakistan 3-2 in penalty shoot-out in the last edition’s final held in Nepal, will square off their second match against Sri Lanka on August 25 before playing Nepal and host India on August 27 and 29 respectively.

Earlier, India got off to a winning start in the championship beating Nepal by 5-0 goals while Bhutan suffered a 2-3 goals defeat at the hands of Sri Lanka in their opening match.

Earlier on Tuesday, Holders Bangladesh Under-15 Football team beat United Sports Club U-15 side by 3-1 goals in a practice match at Kalyani Stadium in West Bengal.

A 30-member Bangladesh team — 23 booters and 7 officials — reached Nadia district in West Bengal Monday to participate in the competition.