Shah Rukh, Emraan face off in Bard of Blood 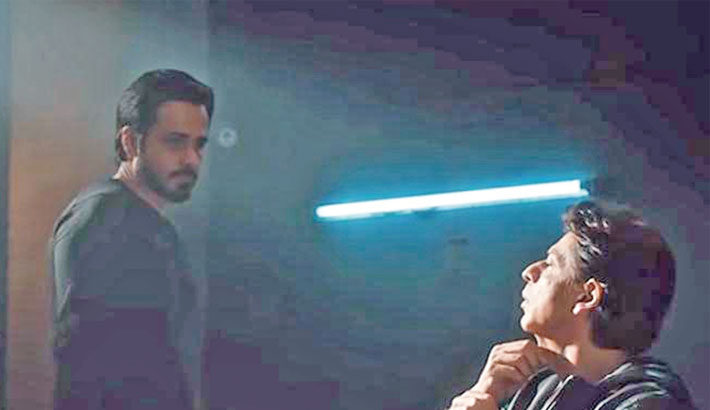 Netflix' new series, Bard of Blood, looks quite fascinating. Starring Emraan Hashmi as a spy, the spy thriller is the first original developed by Shah Rukh Khan's Red Chillies for the streaming giant. The trailer of the web series dropped on Wednesday, reports mid-day.

Playing a former spy who has given up the gritty life for a peaceful one, Emraan Hashmi said, "You will first spot Kabir Anand in Mumbai as a literature professor, teaching Shakespeare in college. He is then reluctantly pulled into the battlefield because of a certain situation." However, a call from the PMO brings him back to the difficult terrain of Balochistan where he has to rescue four Indian Intelligence Wing (IIW) officers who have been captured.

The premise of the web series sounds interesting, doesn't it? To keep the audience on their toes, The makers of Bard Of Blood and SRK's production company shared a 4-minute and 41-second clip that features the legendary actor (SRK) interrogating the legendary spy (Hashmi).

The video shows the two in a dark, dank, interrogation room, where Hashmi can be seen with his face covered. Shah Rukh Khan, as always, is in his element and brings in a bit of humour in the otherwise eerie video.

Bard Of Blood also features Sobhita Dhulipala, Kirti Kulhari and Vineet Kumar Singh in pivotal roles. Emraan Hashmi, in the interview with mid-day, shared how it is his creative impulse that made him explore the OTT platform. He said, "I've always believed that in movies, because of the very nature of the business, there are a few stereotypes that one has to abide by. That is not the case here. One can try out nice and experimental ideas with a platform like this. I probably consume more than 80 to 90 per cent of my media through Netflix."

Emraan Hashmi further said that he couldn't have asked for a better show for his digital debut. "When Red Chillies offered the show, they felt I might have reservations about foraying into the OTT platform. I had already read the book, and when I read the first three episodes of the adaptation, I decided to give it a shot," said the actor.