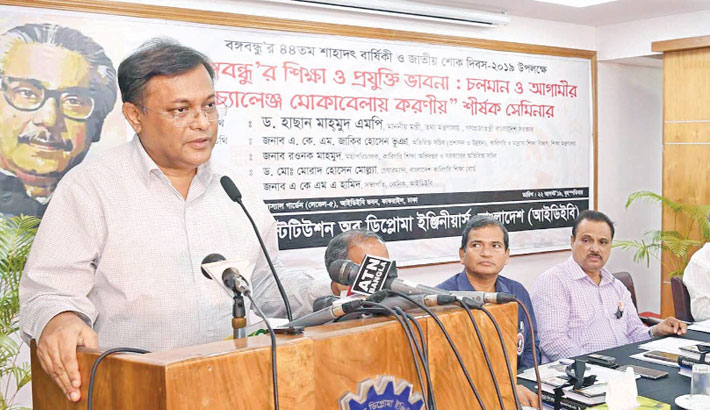 Information Minister Dr Hasan Mahmud speaks at a seminar on ‘Bangabandhu’s thought about education and technology’ at IDEB Bhaban in the capital on Thursday. - SUN PHOTO

Information Minister Dr Hasan Mahmud on Thursday said Begum Khaleda Zia was well-informed about the August 21 grenade attack and she must be brought to justice to deliver fairness to the victims of the carnage.

“The attack was done at the instigation of Tarique Zia and her mother was well-informed about the plot,” the minister said adding that Begum Zia must be exposed into trial for the heinous attack.” The minister was speaking at a seminar organised by the Institution of Diploma Engineers Bangladesh (IDEB) marking the 44th martyrdom anniversary of Father of the Nation Bangabandhu Sheikh Mujibur Rahman at its auditorium in the capital.

Dr Hasan said the then DGFI tried to investigate the grenade attack incident  based on ground report of intelligence agents. “But, Begum Zia rebuked them,” he said.

He said it was Bangabandhu who established the rights of self-rule and self-determination of the Bengalee nation. Bangabandhu had been nourishing the dream of independence for long and he was waiting for a proper time for its proclamation. Braving all odds, Bangabandhu prepared the nation for independence,” he said.