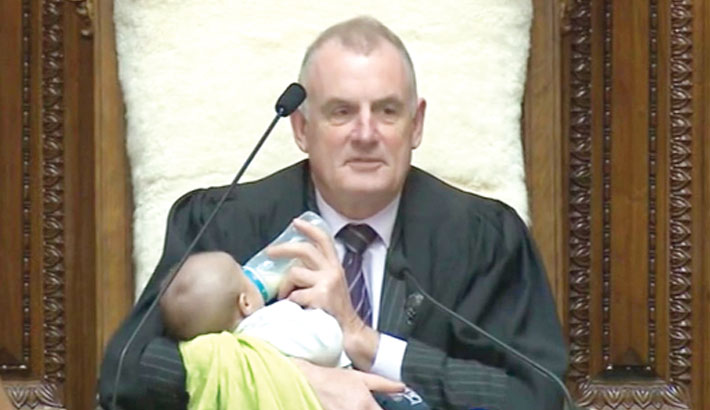 The speaker of New Zealand’s parliament has cradled a lawmaker’s baby while he presided over a debate in the House of Representatives, reports BBC.

Coffey, Labour MP for Waiariki, announced the birth of his son, Tūtānekai Smith-Coffey, in July.

The baby was born via a surrogate mother and is the biological son of Coffey’s partner, Tim Smith.

In a tweet about the baby’s birth, Coffey said he and his partner were “overwhelmed at the miracle of life” and the surrogate mother - a friend of Smith - was “doing awesome”.

On Wednesday, Coffey attended a parliamentary debate with his baby for the first time after returning from paternity leave.

During the session, father-of-three Mallard took on the role of babysitter as well as speaker.

A picture of Coffey holding up the baby in parliament was shared by Green Party MP Gareth Hughes on Twitter.

“Lovely to have a baby in the House, and what a beautiful one @tamaticoffey,” Hughes wrote in the tweet.

Speaking to Newshub, Coffey said he felt “really supported by my colleagues from across the House”.

Coffey is the latest MP to bring his baby to parliament, following the example of politicians across the world.

Lib Dem leader Jo Swinson, who attended a debate with her baby in 2018, and Australian Senator Larissa Waters, who breastfed in parliament in 2017, are among the legislators to make headlines.

And in September last year, New Zealand’s Prime Minister Jacinda Ardern made history by bringing her baby along to her debut speech at the UN in New York.