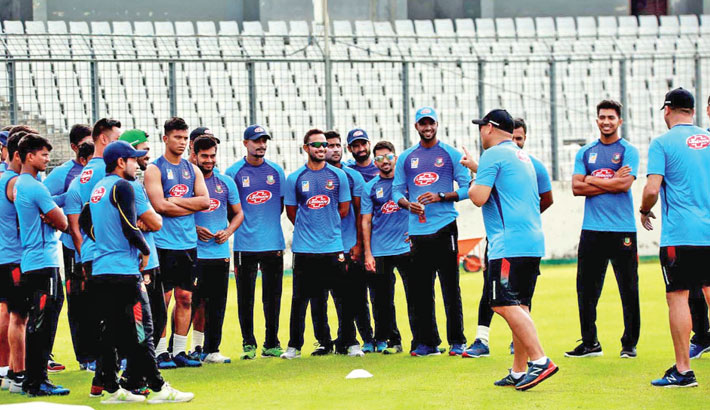 Bangladesh newly appointed head coach Russell Domingo said on Wednesday that he is ready to adapt with the cultural changes as he takes the reign of a sub-continental set-up for the first time in his career. 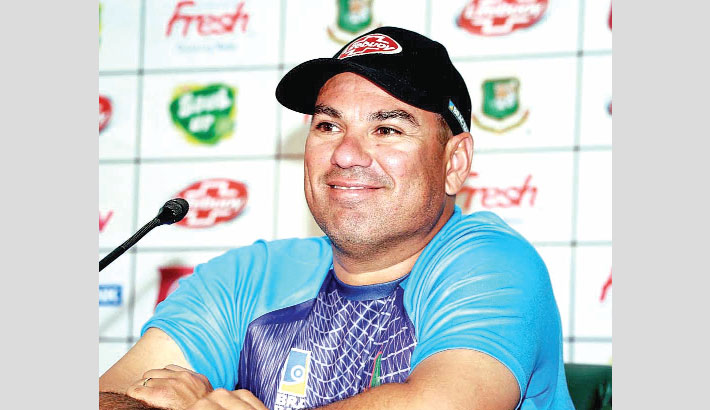 Domingo, a former coach of South Africa, has been appointed on a two-year contract by BCB as they parted ways with former head coach Steve Rhodes after ICC World Cup 2019.

Domingo, who arrived a day before to join the conditioning camp of Bangladesh ahead of their upcoming series against Afghanistan for the one-match Test series followed by the Tri-nation Series involving Zimbabwe, Afghanistan and  the hosts, looked totally bemused by the media attention.

“I think it’s the seventh time I have been to Bangladesh, the first time I was here was during the Under-19 World Cup in 2004, which was a long time ago. The thing that strikes me each time is exactly this, the number of people that are interested in Bangladesh cricket. I am from South Africa where, if you get to a press conference for a big game, there may be eight to nine reporters. I’ve never seen this many reporters in my life. I got to the airport and there were so many cameramen, it was crazy. So the passion has always struck me, about Bangladesh cricket. You always see people dressed up in tiger suits, the supporters at the ground, there’s definitely massive support for the team. That’s probably what brought me to this part of the world,” Domingo told reporters in the official press briefing at BCB media center after having a close look at his charges earlier in the morning.

“My immediate goal is to make some sort of connection with the players, to understand the players, build some relationships over the next week or two. I think that’s massively important. Try and gain the players’ trust, see how the players go about their work. It’s very much an observatory role for the next couple of days, to just see how they go about their business and take some lessons from that,” he added.

Domingo was part of a three-man shortlist, which included Mike Hesson and Mickey Arthur, and had been interviewed by the BCB on August 7 and later according to BCB officials he was appointed as the head coach on the back of an impressive presentation.

When asked to elaborate on the presentation, Domingo looked pretty shy initially before opening up gradually.

“It’s quite interesting. Everyone is talking about this presentation. Because I have worked at a lot in different levels of cricket, from Under-15 to Under-17 to domestic cricket to international cricket, I think I am very aware of how important feeder systems are. That’s where your next crop of players come from. I want to place a lot of emphasis on monitoring the players who are just below the national set up, and when there are opportunities to include some of those players in the national fold, you need to take those opportunities It can’t be for one or two games, you need to try and give players a little bit of a run. Young players especially, so they can find their feet in international cricket. So I think the gist of the presentation was that, that we’ve got a good national side but it’s important that we are evaluating the players just below the national side to sustain the success of Bangladesh cricket,” said Domingo adding that he is ready to look beyond the national set-up and in order to do that he is planning to go to Sri Lanka to see the matches of Bangladesh ‘A’ Team.

“After our series against Zimbabwe and Afghanistan, I am hoping to go to Sri Lanka to watch the ‘A’ side play, the ‘A” side has a tour to Sri Lanka in the middle of September and I’m hoping to watch them in those games. It is impossible to watch all the cricket that’s happening round here, there’s no doubt about that. I’ve got to make sure that I surround myself with people I can trust, selectors who are going to give me good inputs, connect with the high-performance coaches, with the ‘A’ side coaches, and find out who they think the best players are that we can invite closer to the national side, but it’s impossible to watch each and every game,” he said.

Domingo added that he is confident that Bangladesh can be a force to reckon in the coming days despite the fact Bangladesh were humiliated by Sri Lanka in the three-match ODI’s after their rather disappointing performance in the World Cup.

“I don’t think they are a bad team because they lost to Sri Lanka. Touring straight after a World Cup is always going to be hard. Sri Lanka probably had a bit more to gain from it with a few players leaving, it was Lasith Malinga’s last game, Nuwan Kulasekara was given a farewell as well, they had a bit more to prove. While Bangladesh players, I was watching from the outside, had just come off a long World Cup and probably needed more break than they did, so I wouldn’t read too much into the Sri Lankan series. The World Cup performances, I thought they played really well. They were really close to winning some of the games which were eventually lost. You think of the game against New Zealand, maybe a missed run out cost them the game. The margins of winning and losing in international games are minimal, so I think the team is really close to becoming a real force in world cricket. If they just make the right decisions, at the right times, on the right days, I don’t think they are really very far off other sides at the moment,” told Domingo.

“The log will say they ended seventh (eighth), I think they played better than that. And I have been in international cricket long enough to know that sometimes the results can hinge on a decision here and there, so it’s not always a fair reflection of where you are as a team. There were a lot of positives to come out of World Cup that they can build on going forward for sure. There are a lot of areas they can improve in, but there were a lot of positives in the World Cup,” he said.

Domingo believes that Bangladesh lack the X-factor in Test cricket due to the fact they don’t play Test regularly and added that ICC Test Championship is a platform which he would like to use to make a statement in the longer formats.

“It’s hard to get any sort of rhythm in Test cricket if you’re not playing that many Test matches. With the new Test Championship, it allows a team to focus a lot more on Test cricket. We know Bangladesh often play one or two match Test series. Hopefully now there will be three-match Test series, four-match Test series, which gets them more accustomed into that format. Because so much focus is there on white-ball cricket, with the Test Championship, a lot of that focus now will move away from World Cup and 50-over format into Test cricket. So it will be a good start to put a lot more focus and emphasis on our red-ball skills in the next couple of months,” said Domingo.

“It’s a massive opportunity for Bangladesh to compete regularly in Test cricket. Their last Test match was maybe six months ago, we can hardly remember when it was. The more you play the better you’re going to get in the format. That’s probably where they have been lacking. They haven’t played a lot of Test cricket. If you look at the number of Tests played by England, Australia, India, and weigh those up against the number of Tests Bangladesh have played, you can understand why the formers are the leading sides in the world in that format,” he said adding that he is looking forward to meet the expectations that he is bound to have during his stint with Tigers.

“I am sort of used to that expectation and that pressure. So I am looking forward to it. I have not been with a team for two years, I have been working South African ‘A’ side, and I’m really excited to get going again and work with a lot of people and work on cricket and think about selection and strategies. It’s been great for me for two years to be away from it and take a step back but you do miss it. As coaches, you thrive in that sort of pressure, you enjoy it. No matter which team you are coaching, there’s always some sort of pressure to win. That’s why we do it, because of the pressure if we knew we were going to win every single game, it’d be the most boring job in the world. The most enjoyable part of the job is the pressure to win,” the South African concluded.