Mural from 3,800 year ago unveiled in Peru 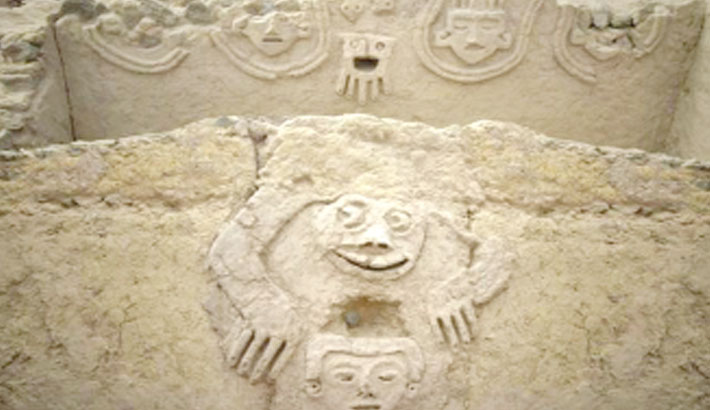 A mural thought to be 3,800 years old has been revealed by archaeologists in Peru.

The wall, unveiled on Monday, was found inside a public ceremonial building at the Vichama site, north of Lima, reports BBC.

The complex carved scene depicts iconography including a human-like toad and representations of people.

Dr Ruth Shady Solís, director of the Caral Archaeological Zone (ZAC), believes the scene represents the “arrival of water” through rainfall. She says that in Andean civilisation, toads represented water and says the face below it represents humans waiting for rainfall to give continuity of life.

Another depiction found nearby shows four human heads with snakes encircling them and what appears to be a seed with a face.

Researchers said the sculptures would probably have been produced in a period of scarcity and famine.

Tatiana Abad, another archaeologist at the site, said at a news conference on Monday the carving represented a time of “crisis” for the people living there.

The Vichama site is located in Huaura province in modern-day Peru, about 150km (90 miles) north of the capital Lima.

Excavation started there in 2007 and experts believe it was an ancient agricultural and fishing community.

They consider it one of the most important population centres from the Caral civilisation, also known as Norte Chico, thought to date back 5,000 years.