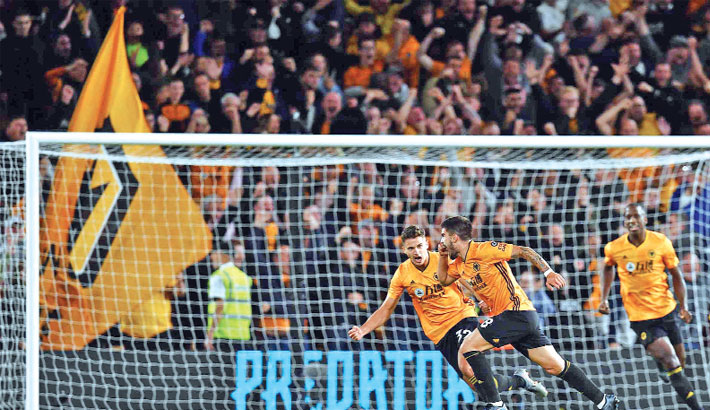 Manchester United were forced to settle for a 1-1 draw against Wolves after Paul Pogba’s penalty was saved by Rui Patricio at Molineux on Monday.

Ole Gunnar Solskjaer’s side took the lead through Anthony Martial’s second Premier League goal of the season in the first half.

Ruben Neves hit a brilliant equaliser for Wolves after the interval before France star Pogba was denied by Patricio.

It was a curious decision for Pogba to take the spot-kick as Marcus Rashford had scored a penalty in last weekend’s 4-0 victory over Chelsea and also memorably netted the Champions League last-16 winner from the spot against Paris Saint Germain last term.

United would have gone top of the table with a win, but instead they were left to reflect on an inconsistent performance that underlined why Solskjaer still has a lot of work to do to turn his team into title contenders.

While there were moments of promise in attack and defence, United didn’t take their chances and crumbled too easily when they came under pressure in their second game of the season.

At an average of 24 years and 173 days, Solskjaer had picked United’s youngest Premier League starting line-up since the final day of the 2016-17 campaign.

Daniel James made his maiden start for United after the close-season signing from Swansea scored his first goal as a substitute against Chelsea.

There was no place in the matchday squad for Chile forward Alexis Sanchez, who has been linked with Inter Milan.

Solskjaer has described James as United’s ‘x-factor’, but the 21-year-old didn’t win any friends when he was booked for diving in a failed attempt to win a free-kick from referee Jon Moss.

United threatened for the first time when another of their young guns Rashford spun past Ryan Bennett on the left side of the Wolves area and crossed towards Martial, who did not make enough contact as the ball flashed past him.

It was a warning Wolves failed to heed as United took the lead with an incisive raid in the 27th minute.

Breaking inside from left, Luke Shaw found Jesse Lingard who moved the ball onto Rashford.