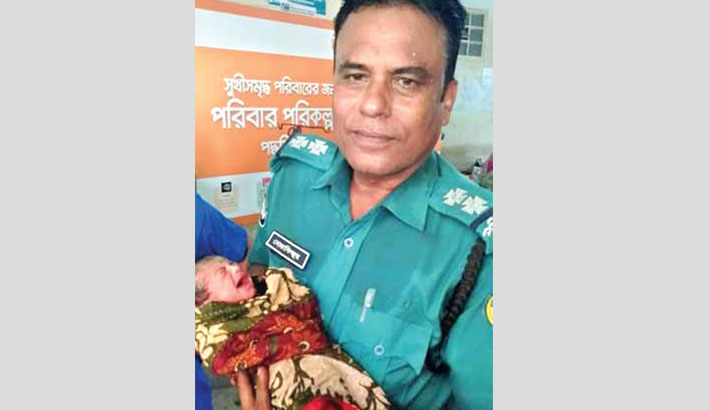 A policeman takes an infant to Chattogram Medical College Hospital for treatment on Tuesday after saving the newborn from a dog in the city’s Agrabad area.

CHATTOGRAM: A policeman rescued a newborn baby from Badamtali area of the port city early Tuesday.

The newborn was rescued by Sub-Inspector Mostafizur Rahman of Double-Mooring Police Station.

Later, the mentally-challenged mother of the newborn was found in the same area.

Assistant Commissioner (AC Double-Mooring Zone) of Chattogram Metropolitan Police Ashiqur Rahman said the newborn was in front of Agrabad Shonali Bank where three dogs were quarreling to take away the baby.

“At that time, on-duty SI Mostafiz noticed it and rescued the newborn alive around 5:00am,” he said.

SI Mostafiz said he rescued the newborn from dogs’ trap with the help of a pedestrian woman.

“I was curious of quarreling among the dogs. Then I noticed a newborn was in trap of dogs and we took her to the hospital,” he added.

“On the way to CMCH, we found the mother of this newborn in the same area,” said Mostafiz.

Locals said the mother of the rescued baby is mentally-challenged and had been staying in Agrabad area.