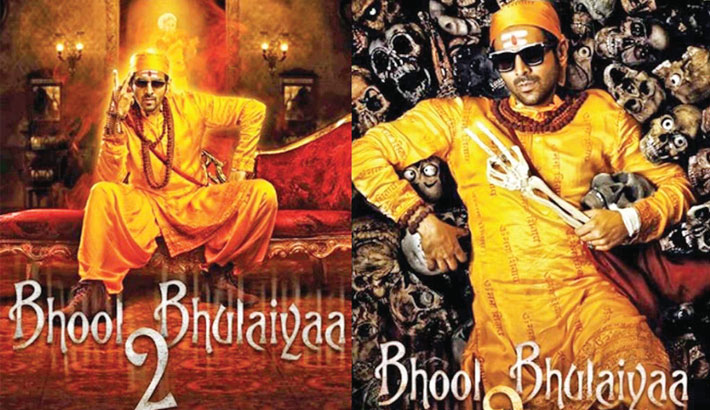 Actor Kartik Aaryan has shared the first look of his next, Bhool Bhulaiyaa 2. The actor seems to be a tantrik but with a hilarious twist and introduced it by referring to the hit number from the original, starring Akshay Kumar, reports Hindustan Times.

The first look of the film was received well by the fans of the original film. A fan wrote, “OMG ! I wanted it from ages... I’m the happiest person after seeing this poster.” Another wrote, “Haha.... Well on first look you are looking like Akshay Kumar sir. Well Congratulations for this achievement.”

A posters of the film show him wearing shades and holding a skeletal hand.

Kartik will be stepping into the role of Akshay Kumar, who played a psychiatrist in the original. Vidya Balan played the female lead in the film who transformed from her normal self to Manjulika, assumed to be possessed by the ghost. She also performed the popular number, Ami Je Tomar in the film.

The original was directed by Priyadarshan and starred Shiney Ahuja as Vidya’s husband in the film. It revolved around a couple who experience a supernatural activity at their ancestral home.

Earlier, a source had told, “While the makers have locked the idea, the script is still to be finalised. But the idea was shared with Kartik who liked it and has agreed to take the franchise forward with the story set in a metropolis.”

“Bhushan always wanted to continue with Bhool Bhulaiyaa and is invested in the film. He is looking to start filming by the year-end,” the source added. The film is set to be directed by Anees Bazmee and is scheduled to hit screens on July 31, 2020.