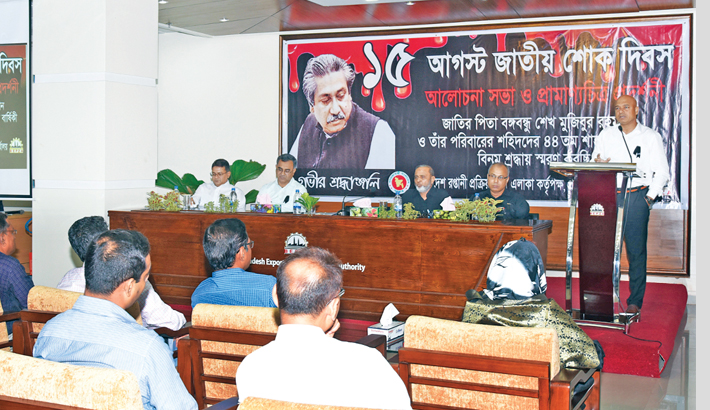 BEPZA Executive Chairman Major General SM Salahuddin Islam is seen at a discussion on the occasion of the National Mourning Day on the BEPZA Complex premises in the city recently.

Executive Chairman of BEPZA Major General S M Salahuddin Islam, along with high officials, placed wreaths at the mural of great architecture of independence and Father of the Nation Bangabandhu Sheikh Mujibur Rahman at the BEPZA Complex premises in the city on August 15 morning, said a press release on Sunday.

Before that, the Executive Chairman placed wreaths at the portrait of Father of the Nation Bangabandhu Sheikh Mujibur Rahman in Bangabandhu Museum at Dhanmondi 32 on behalf of BEPZA early in the morning.

Commemorating the 44th martyrdom anniversary of Bangabandhu and his family members, BEPZA kept national flag half-mast on the day at BEPZA Complex.