Sweet and sour of holiday journeys 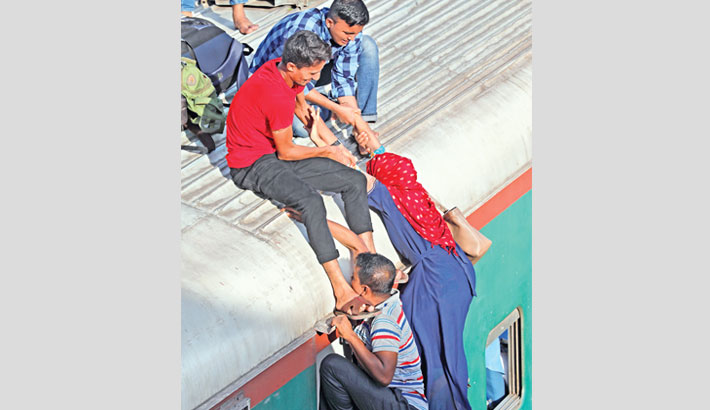 Two men help a woman get onto the rooftop of a train as she failed to get a seat in the jam-packed rail coach. During Eid holiday, a section of passengers become desperate to make perilous journey. The photo was taken from Airport Railway Station in the city on Saturday. - Kamrul Islam Ratan

Thousands of people heading to join their families from capital Dhaka have apparently beat the pain of their miserbale journey except for one incident of anger being vented two days ahead of the Eid-al-Azha, the festival of sacrifice.

Witnesses said long tailbacks on different highways, ferry terminals and delayed train services have put the holiday crowd in extreme miseries, yet they were seen smiling away amid strong sun.

Thousands of the home-bound people were stuck on the Dhaka-Tangail highway due to a 75 km-long tailback, while vehicles were moving slowly for nearly 75 kilometres stretching from Gorai in Mirzapur upazila to Bangabandhu Bridge. In the past two days, the same place of this highway witnessed similar situation..

Meanwhile, agitated holidaymakers staged demonstration by placing logs at different points on the Dhaka-bound lane of the highway and vandalised two microbuses in Rabna bypass area under Sadar upazila of the district around 10:45am.

Iftekhar Nasir Rokon, Bangabandhu Bridge east-end highway police sergeant said the huge traffic congestion on the highway from Bangabandhu Bridge to Pakulla was created due to the pressure of Dhaka-bound cattle-laden trucks and vehicles of Eid holidaymakers.

Law enforcers and volunteers have been working on the highway to ease the gridlock, Nasir said.

More than 400 vehicles, mostly private cars and trucks, have been left stranded on the banks of the Padma River at Munshiganj’s Shimulia ferry terminal.

“The river port was crowded by a large number of homebound travellers since the morning. However the pressure became manageable afterwards,” said Md Nasir Uddin, assistant general manager of BIWTC at Shimulia ferry ghat.

A total of 17 ferries and more than 300 speed boats are transporting passengers along the water route, he said.

“There were no buses plying the route as of 11am on Saturday. But over 300 private cars, trucks and other vehicles remained stuck near the harbour.”

“Ferry operations were quick and regular at the Shimulia-Kathalbari route since morning due to the low currents in the Padma River.”

However, a large number of Eid holidaymakers struggled to catch launches and speed boats at the Shimulia Ferry Ghat on Saturday morning.

Many passengers claimed the launches were overloaded. But the magistrates, police, RAB, coast guards, fire service personnel, rover scouts and medical teams are working to ensure hassle-free journeys for holidaymakers.

Unlike previous years, no traffic congestion was spotted on Dhaka-Sylhet and Dhaka-Chattogram highways, resulting holidaymakers’ letting out sighs of relief.

The areas of both of the highways in Narayanganj part, which are prone to traffic congestion, were seen normal in last couple of days.

The authorities attributed this relief to Second Kanchpur Bridge, Meghna Bridge on Dhaka-Chattogram highway, Bhulta Flyover on Dhaka-Sylhet highway and the four lane.

The traffic jam, which was visible on Dhaka-Sylhet highway, is not there at all.

The Eid-ul-Azha, the second largest religious festival of Muslims, will be celebrated in the country on Monday.

On the other hand, passenger buses are leaving Dhaka terminals after spraying aerosol inside.

Earlier, Road Transport and Bridges Minister Obaidul Quader issued a directive asking the authorities to spray aerosol inside buses before starting the journey.

The directive came amid outbreak of dengue fever across the country.

Meanwhile, like the previous days, six trains commuting to west zone will depart Dhaka’s Kamalapur Raiway Station by one to fifteen hours’ late on Saturday.

Moreover, several trains bound to west have been reported one hours’ delay on the track.

However, rail secretary said passengers can return the tickets, if want.