My goal is to play World Cup 2023, says Mushfiq 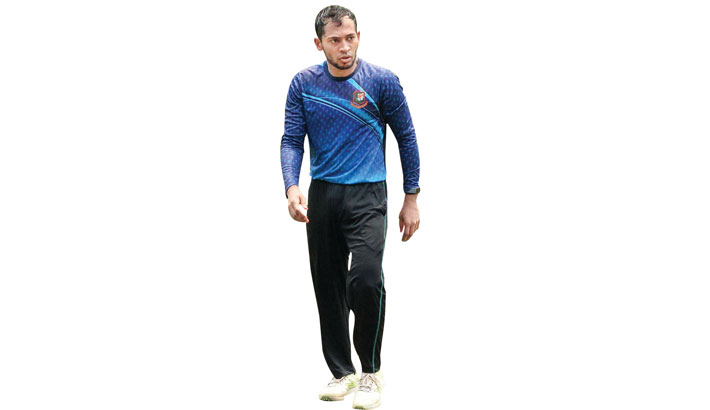 Bangladesh’s Mushfiqur Rahim remained an unsung hero in the just concluded World Cup as his effort was over shadowed by the brilliance of Shakib al Hasan. Mushfiqur does not mind the fact as he is quite used to it but what he achieved on the process is something that is more rewarding than anything else which is- confidence- to take his game to the next level. Mushfiqur spoke exclusively with daily sun regarding his ambitions that includes obtaining a PhD in South Asian Cricket.

daily sun: You seem to be pretty busy with your studies these days?

Mushfiqur Rahim: So far it is going good. I got admitted in Jahangirnagar University for Mphil (Master of Philosophy) after completing my masters. I have year final exams scheduled to be held on July 18 and another one is on August 4. So my target is so start my PhD as soon as possible after completing my MPhil. So it was my target to set an example. After masters my teachers inspired me so then I thought I could at least give it a shot. Even one of my teachers is doing Mphil with me as you know people do it after taking a break from the studies. There are some other teachers from other departments in my class.

daily sun: What is the topic of your PhD?

Mushfiqur Rahim: as I am cricketer, I am doing my PhD on South Asian Cricket history. I have practical experience on the field as a cricketer. So if I can pull it off which is related to cricket I think it will help me a lot. That why I picked this subject. Normally it takes around two and a half years. You have to submit a thesis.

daily sun: How do you juggle between cricket and study?

Mushfiqur Rahim: Definitely it is tough to maintain both. But it also gives you some kind of mental satisfaction. I always wanted to continue both as there is no guarantee to have a long successful career in sports and that is the reason I always wanted continue as a scholar as it will remain as a back-up plan. It also gives me my mental satisfaction.

daily sun: But it must be quite a tough task considering your schedule as a professional cricketer.

Mushfiqur Rahim: Definitely (it is tough). It has been more than four years since I have finished my masters. Now I am father too.  So sometimes when I’m reading my son comes to play with me and want to spend time with me. He also complains if I don’t give him the attention. He always wants attention and I enjoy being a father. So I have to manage everything and it is quite challenging.  It’s a different challenge now. You get different challenges at different phases of your life. I faced a different challenge five years back and now I am facing a different form of challenge. So far, I am trying to manage everything together. As you know Mphil is not such a long course. So it is not necessary to read for long, but still I try to read for three-four hours. I start reading after evening or at night. So far I have been able to balance my commitments to sports and study.  But everything will depend on result. But I am trying my best.

daily sun: Now let’s get back to cricket. You started your preparation for the Sri Lanka tour recently. Do you feel all right considering the few injuries?

Mushfiqur Rahim: I have started batting session from today and I had some pain in my elbow. But I am feeling good now.

Mushfiqur Rahim: Yeah, maybe. If you see the list of best batsmen at number four currently I think I will be at second. So it is a big satisfaction. It also inspires me to do more hard work to achieve more success and take on more challenges. I also would like to prepare myself better. So, whatever I have done I am happy but not as much as expected but yes I contributed in some matches which helped our team to achieve victory.

daily sun: It has been long since you made your debut. You must be eyeing some memorable contributions.

Mushfiqur Rahim: Yes, I always to try to contribute so that we can win. I am trying to do everything that is possible by me (in term of earning success) like working hard as I have done earlier.

I am also getting older so I will try to be more impactful. To be honest as I am in the last phase of my career, so I can’t relax in any match. After playing cricket for 10-15 years now it is high time to take my game to the next level like playing a match winning innings and not just scoring a 50 or 60 odd runs. Otherwise it won’t be fruitful. As a player every time you play you have to keep one thing in mind that is your team should be benefited by your performance. I have earned that belief (to take my game to the next level) because when you perform against strong attacks in tough conditions you gain that. Even against Afghanistan too. They had three best spinners. So it was tough performing in those situations as on the other end we were losing wickets so it was challenging but I was under control against top quality attack. So I liked these two innings.

daily sun: Tell us something about the World Cup campaign. I mean there were lots of controversies surrounding certain players. How do you process these issues?

Mushfiqur Rahim: Everyone played some outstanding innings in this World Cup against a quality attack. Shakib, Riyad [Mahmudullah] bhai, Liton Das and Tamim Iqbal also were sensational but some people are not happy with Tamim’s performance. If you bring out Tamim’s stats and compare his performance in World Cups, you will find it to be his best performance in previous two-three World Cups. Maybe, he could not play the way he has been playing for last couple years. Mustafizur Rahman used to take 5-6 wickets on regular basis at the beginning of his career now if he takes two wickets it does not look as impressive but if you observe keenly it still is a very good record. So it’s same with Tamim. We will never have a player of his caliber. I can assure you that. No one can break his record, I think. So whatever he has been going through I think it is just a matter of time, as he has always came back.  I think no one can beat the records he will set.

daily sun: Don’t you think you can beat Tamim considering you are considered as one of the best batsman of the country?

Mushfiqur Rahim: Definitely we have that competition of beating each other among us. So the amount of run that Tamim scored if I can do the same definitely it will be a huge contribution to Bangladesh cricket. If I can win Bangladesh many matches all on my own and the way Shakib was batting if he continues in the same form it will be better for both him and our team. Young players like Soumya and Liton, if they become more consistent it will be better for the team.

daily sun: Now let’s get back to the upcoming series against Sri Lanka. Do you feel adapting to weather will be your major concern as you will be playing cricket somewhere totally different from England where you completed the World Cup assignments?

Mushfiqur Rahim: We have played in different conditions. Now we will have to play in an another condition. So it will be a challenge. And yes in Sri Lanka we have less chances of wash out as there they cover the whole ground when it rains. Also, we are going to Sri Lanka five six days before the series so we will have enough time to practice. So I hope our preparation will be very good. Sri Lanka defeated England though they were not in their best form during ICC World Cup. I will say they are a very strong at home. So defeating Sri Lanka at their home will not be so easy.

daily sun: Do you feel we have the ability to win series considering some of the seniors will be unavailable?

Mushfiqur Rahim: Certainly we will miss some of our senior batsmen in this series and we will also have some injury concerns I think we have that ability to win a series against them even in Sri Lanka. Despite the fact that we never won a series against them but the outstanding form that we have shown against some of the top nations in the World Cup I think that will give us confidence.

daily sun: But the pressure will be on you against Sri Lanka to perform.

Mushfiqur Rahim: Earlier Tamim was not available in Asia Cup. So other batsmen tried. So these kinds of situation help you become a better batsman as you handle tough situation. Personally, I like these situations.

daily sun: So your next goal must be to play 2023 World Cup?

Mushfiqur Rahim: Definitely I have a big plan but I like to think series by series. And I prepare according to that and also practice according to that. When you will think series by series, it will help to keep you in form. If you think of too far away, it becomes tough to maintain the consistency. We have to think slot by slot but in the end of the day, its far way.  But it is my goal to play 2023 World Cup.