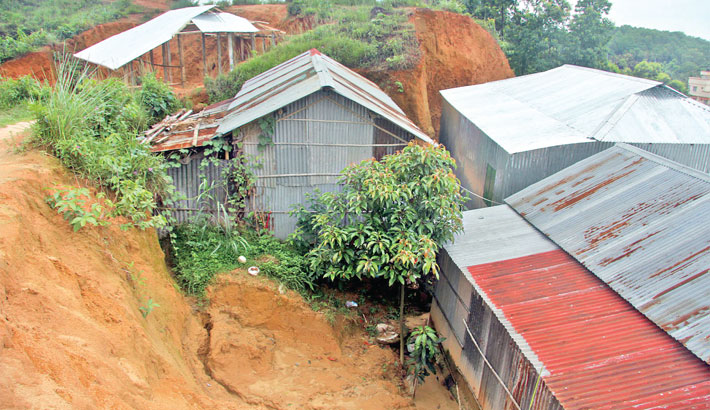 Several tin-shed houses have been built illegally on the slope of a hill at Akhalia Nayabazar in Sylhet city. Despite the risk of landslide, many people are living in those houses. The photo was taken on Sunday. – Mamun Hossain

Thousands of families are living in pockets and slopes of hills in Sylhet city, putting their lives at risk.

Rampant flattening of hill and soil saturated with rainwater increased the risk of landslide.

The hills in the district have become risky due to incessant rains for the last few days. But no initiative has been taken so far by the district administration to evacuate them from the risky hills.

There is no accurate statistics of the number of the families living on the slopes. But a survey of done by voluntary organization ‘Save the Heritage and Environment’ in 2017 found that 10,000 people are at risk in the district.

“However, the figure has now exceeded 20,000,” said Abdul Hye Al-Hadi, chief coordinator of Save the Heritage and Environment.

Over 1000 families have been living for long by making makeshift houses on the hill slopes in the city, suburbs and some upazilas of the district.

Sources said in order to occupy the land, the local influential people are renting the land of hills to the landless poor people by constructing makeshift houses in the hill.

Visiting the Jahangirnagar, Goabari and Hawladhar para, Dolia and Borogul areas recently, this correspondent found that over 100  families are still living on the hill slopes.  In the last few days, some hills have already become risky. Local residents are afraid of accident at any time.

Hanufa Begum, a housewife living in the foothills of Jahangirnagar area, said “My husband arranged the home. We know that there are risks in the rainy season to live here. But we have nothing to do without staying here.”

Liza Begum, another resident of the same area, said, “Where will we go? I know that there is risk of hill collapses when it rains. But we have no place to go. So we are staying here with the risk.”

Apart from those, more than a thousand of people living in Nayakhela, Anja Gram, Fenchuganj, Golapganj of Jaintapur upazila and Beanibazar upazila.

Abdul Karim Kim, general secretary of Sylhet unit Bangladesh Poribesh Andolon (Bapa), said: “Every year monsoon raises concerns about the people living in the foothills, but there is no surveillance throughout the year. Thousands of people live in the risky hills of Sylhet metropolis and division.”

“After flattening hills, tin-roofed houses are built on the slopes to rent out to poor people, mainly as part of plotting to cut the hill” he added.

He said “The poor people live at risk without thinking anything in these areas. And influential people became beneficial.”

M Kazi Emdadul Islam, Deputy Commissioner of Sylhet, said “There is no accurate statistics of the number of the families living on the slopes. But during the rainy season we announce with loudspeaker to leave the risky hill slope for safer places.”

He also said: “We can’t interfere in the private ownership of hills. But we are working to raise awareness among the people.”