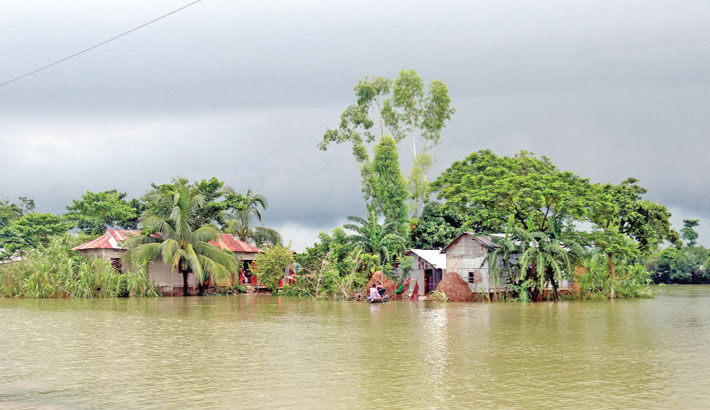 Several villages in Sadar upazila of Sylhet district have been submerged following a rise in water level of the river Chengerkhal. The photo was taken from Baorkandi village on Saturday. —Mamun Hossain

Bangladesh’s capital Dhaka, surrounded by six major rivers, is at risk of being hit by floods as the situation worsened across the country Saturday as new areas were inundated in the northern, northeastern and southeastern regions with experts forecasting more rains this month.

The World Meteorological Organization forecasts that in July, Bangladesh will be hit by the highest amount of rainfall for all of 2019, with more than 730 mm of rain expected over an average of 22 days.

Experts said that swelling waters of the  Buriganga, Turag, Balu, Shitalakkhya, Dhaleshwari and Bangshi rivers were likely to flood  Dhaka and its surrounding districts. The low-lying areas of the central region of the country may be affected within the next six days, official sources said.

River erosion has also taken a serious turn while crops on a vast tract of land were damaged due to flooding in the areas. Water levels of the major rivers in the country saw further rise on Saturday due to heavy rainfalls upstream across the border in India, said Flood Forecasting & Warning Center (FFWC) Executive Engineer Arifuzzaman Bhuiyan.

Swelling waters of the rivers burst their banks and flooded new areas as the situation in this calamity-prone country worsened.

Dr. AKM Saiful Islam, professor of Institute of Water and Flood Management (IWFM) in Bangladesh University of Engineering and Technology (BUET) , told the daily sun that a medium-range flood may hit the country this monsoon season. He said water from the upstream was gushing down into Bangladesh but there were no so far no indications of a major deluge as until now only the Brahmaputra and Meghna basins have been affected, not the others.

“Flood in the Ganges basin is still normal …. we are expecting a 10 to 12 days flood in the country,” he said.

The expert said a major deluge could only happen if the water from all the Ganges- Brahmaputra-Meghna basins overflowed at the same time like in 1988 and 1998, added he.

The flood situation in Netrokona, Sunamganj, Sylhet, Chattogram, Cox’s Bazar, Bandarban, Lalmonirhat, Kurigram, Jamalpur, Gaibandha may further deteriorate in the next 24 hours since Saturday 9:00am, he said.

The river Surma at Kanaighat, Sylhet and Sunamganj point, Kushiyara at Amalshad, Sheola and Sherpur- Sylhet points, Manu at Manu Rly Bridge and Moulvi Bazar  points, Dhalai at Kamalganj, Khowai at Ballah point, Someswari at Kalmakanda point, Kangsha at Jariajanjail, Halda at Narayan Hat point, Sungu at Bandarban and Dohazari points, Matamuhuri at  Chiringa point,  Dharla at  Kurigram, Teesta at Dalia points, Ghagot at Gaibandha, Brahmaputra at Noonkhawa and Chilmari point and Jamuna at Fulchari, Bahadurabad  and  Sariakandi points are following above the danger level on Friday, according to FFWC.