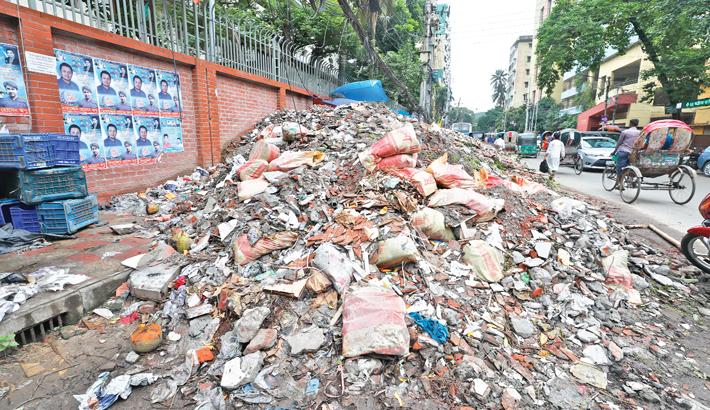 Rubble and construction wastes have been piled up on footpath and a portion of road in front of office of National Board of Revenue at Kakrail in the capital, giving it an ugly look. The photo was taken on Thursday. —Kamrul Islam Ratan

A bad practice of piling up construction materials, rubbles of demolished structures and construction wastes on roads and footpaths as well as in front of residential buildings is nothing new in the capital city.

But this time, construction wastes have been piled up in front of an important government building giving it an odd look and creating nuisance for both the visitors of the government office as well as the pedestrians.

Being advised by the contractors of Public Works Department (PWD), labourers have piled up rubble and construction wastes of a demolished portion of the office of the National Board of Revenue (NBR) on its front road and footpath making the spot off-limits to public.

“Dhaka South City Corporation (DSCC) vehicles removed the rubbish for once or twice, but the greater portion of it was left for days together,” he said.

During a recent visit to the spot, Md Hannan, a labourer, said, “Presently, work on wash rooms at the NBR office is going on. We’re just attaching sanitary wares of the washroom but we’re not aware about those who’ve piled up the rubbish on the footpaths and the roads.”

Nurul Amin, second secretary (administration) of NBR, said, “Renovation of wash rooms on the second floor of the western and southern block of the NBR building is underway. Rubble and construction wastes have been piled up in front of the footpath and road of our building.”

“Distinguished persons from across the country visit our office off and on. During their visit, they face the odd situation. The rubbish has been piled up for long in greater portion of the road and adjacent footpath creating frequent traffic snarl. Sometimes, visitors question about our role,” he observed.

“We’ve already informed the PWD officials for removal of the rubbles and construction wastes, but they they’re yet to respond to our request,” he added.

Md Farid Uddin Ahmed Ratan, a Councillor at DSCC Ward No-20, said, “It’s not our duty to remove the waste, rather it’s the work of PWD. So, I’ve asked the PWD officials to remove those. I’ve also taken steps to remove the rubbish, but I can’ do it due to lack of vehicle. If I get the vehicle, I’ll remove those.”

“As two garbage containers are located in front of the NBR building and on its opposite side, they too spread foul smell. Moreover, some tea stalls are located on the footpaths adjacent to the NBR building.  Many important persons visit the NBR office. They feel unwell at the site of the waste. Sometimes, I visit the office and face the ordeal.”

“I’ve already sent notices to the zonal and mayoral office thrice with a request for  removal of the waste, but to no avail,” he said.

He also asked the reporter to contact officers concerned of PWD.