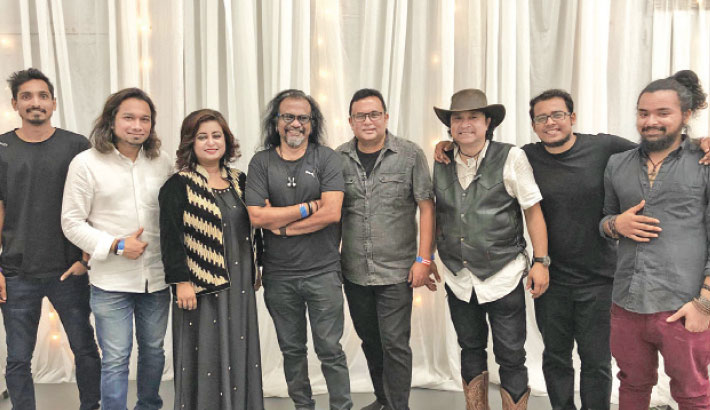 Pentagon is an immensely popular name in the Bangladeshi band music scene. Because of its fresh and unique sound, the band that was formed in 1993 by Mohammad Ali Sumon, Ranjan, Shouquat Ali Emon, Moshiur Rahman Shelly and Javed Ahmed Babu gained rapid popularity. In their debut show, they performed Bengali, English, Latin/Spanish, Arabic, Jamaican and Portuguese songs which stirred up music aficionados that time. People began to say that this band was something different! They totally owned the moment. Since then, it had gone through a few lineup changes over the years. Sheikh Monirul Alam Tipu, Alif Alauddin, Kazi Faisal Ahmed and Morshed Khan were with the band for a long time along with Sumon. However, for various reasons, Alif, Faisal, Tipu and Morshed had to leave the band in 2009.  However a piece of good news for Pentagon fans is that after ten long years, they are again joining the band, thus bringing it back to life! There is also Nafius Salam Yani, Minhaj Ahmed Mridul and Zameel Hossain Saju in the new lineup.

Regarding the return, Alif said she was extremely happy. “Hamin bhai, Partha da and Mac Haque have been telling us to get back together again because Pentagon had a unique sound.” She further added, “The band has a touch of Latin fusion and Bangla. So to bring in that sound and to play with each other once again after all these years we have joined the band.”

Tipu also added his words of delight on the occasion. “It feels great to be back. Of course, Warfaze band is my main priority. However, Pentagon band is like family for its unparalleled bond. Moreover, I love to play percussions. Drums are my zeal but I am also keen on playing percussions. So getting the chance to fulfill this passion for percussions here in Pentagon also feels great.”

Pentagon has a rich and unique history, just like its music. Besides the current lineup that consists of popular artistes, renowned musicians such as Anan (keys), Jibon (acoustic drums), Mahbub (keys), Balam (guitar & back up vocal), Mobin (bass), Shams Mansoor Ghani (keys), Farshid Alam Aumi (vocal & harmony), Mehedi Faruq (keys), Masum Hossain (keys), Masum Wahidur Rahman (guitar), Rajib Hossain (guitar), Ishraque Husain Anita, Shafkat Ahmed Dipto (guitar) and Tanim (guitar) were all part of the band. Their debut album ‘Shei Ami' was released under the banner of Ektaar music while their second album ‘Eight 'O Clock’ was released under the banner of G-Series in 2009. The band was also invited by Tara Bangla channel who wanted to promote Bangladeshi music in a joint collaboration with MTV.

With the new lineup, the fans are definitely anticipating something big. The band came up with the news of disclosure of the new lineup during a performance at a programme arranged by the US embassy in Bangladesh on July 3, 2019.