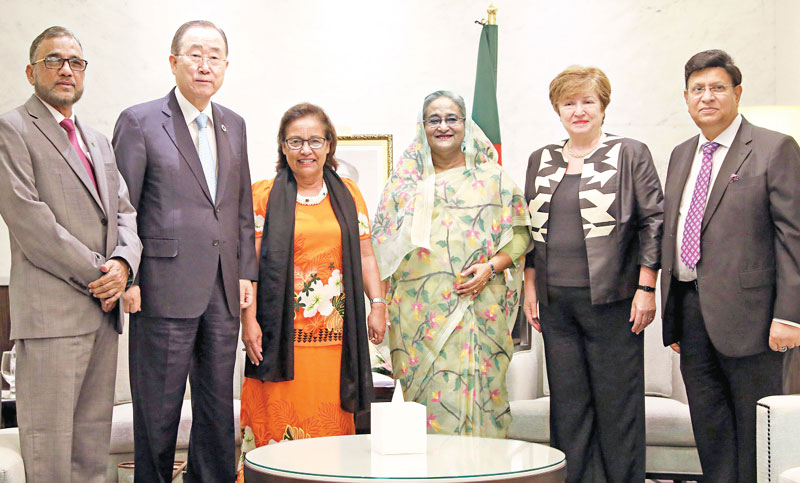 Former United Nations Secretary General Ban Ki-moon on Wednesday said Bangladesh is the best teacher about how to adapt to climate change impact.

He also lauded Bangladesh as ‘miraculous’ in addressing the climate change issues.

Ban Ki-moon said this while speaking at the inauguration ceremony of the Dhaka meeting of the ‘Global Commission on Adaptation’ held at Hotel Intercontinental on Wednesday.

Prime Minister Sheikh Hasina was the chief guest at the programme. Ban Ki-moon is the chair of the Commission that promotes the idea of adaptation along with mitigation regarding climate change issues.

While the rest of the world debate about climate change, Bangladesh is adapting to a warmer, more violent, and less predictable climate, said Ban Ki-moon.

Referring to 1970s cyclone that killed half a million of people in Bangladesh, he said that Bangladesh have effective adaptation capacity and can save people from loss of lives and properties.

“In 2009, Bangladesh became the first country in the world to create national adaptation programme. This is why we are here to learn from you and send message far and wide from Dhaka,” Ban Ki-moon added.

He also cited Bangladesh’s long-term resilience plan ‘Delta Plan 2100’. “We need to share this adaptation practices. We can urgently and cost-effectively find ways to support communities affected by climate change.

We can help them survive. Adaptation is a smart investment”, he said.

Forecasting the sea level rise, he said that if sea level rises by just one metre, 17 percent of the country (Bangladesh) would go under water by 2050.

According to the Intergovernmental Panel on Climate Change (IPCC), Dhaka itself could be engulfed by even or slight rise in sea level, he continued.