Types of parenting: Which one is better? 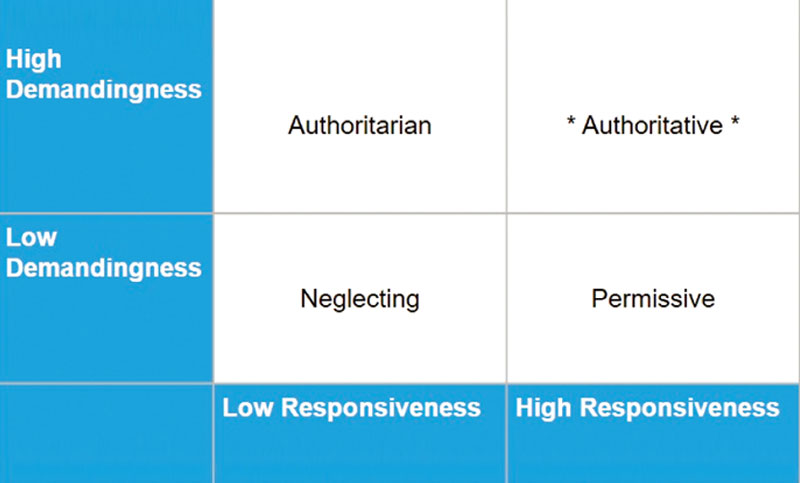 Parenting style refers to a general child rearing pattern that characterises parents' behaviours toward their child. A way of reflection between parent and child relationships is parenting and it is a complex activity that includes many specific attitudes and behaviours that work separately and collectively to influence child outcomes and generate an emotional bond in which the parent’s behaviors are expressed. Whereas others have defined parenting style as a global constructs reflecting the overall emotional tone of the parent-child relationship.

Diana Baumrind, a developmental psychologist at the University of California, identified and defined three different parenting styles viz authoritarian, authoritative and permissive. Again, Baumrind, Maccoby and Martin mentioned that parenting styles arise from the crossing of two different dimensions i.e. demandingness/control and responsiveness. Demandingness is the claims parents make on children to become integrated into the family whole, by their maturity demands, supervision, disciplinary efforts, and willingness to confront the child who disobeys. Responsiveness is the extent to which parents intentionally foster individuality, self-regulation and self-assertion by being attuned, supportive and acquiescent to children’s special needs and demands. Categorizing parents according to whether they are high or low on parental demandingness and responsiveness creates a typology of four parenting styles viz authoritative, authoritarian, indulgent, and uninvolved.

Authoritative parents are both demanding and responsive; warm and nurturing toward adolescent. Authoritative parent is high in control, responsiveness, communication and maturity demands. Their discipline is controlling but not restrictive, oriented to the child’s involvement in the family’s life. They offer trust, support, control, and open communication toward the children. They monitor and impart clear standards for their children’s conduct. They are assertive, but not intrusive and restrictive. Their disciplinary methods are supportive, rather than punitive. They want that their children to be assertive as well as socially responsible and self-regulated as well as cooperative. Authoritative parents participate in interactions with their children characterised by high warmth and utilise non-punitive discipline in which they share reasoning behind rules with their children.

The adolescents of authoritative parents are usually self-reliant and socially competent and have impulse control skills and coping mechanisms, such as emotional regulation, social behaviour, and social competence. Maccoby and Martin found that children achieve the most positive outcomes when reared by parents exhibiting an authoritative parenting style. A recent review found authoritative parenting style positively associated with adaptive behaviours and psychological adjustment and negatively associated with maladaptive behaviours and psychological maladjustment.

Authoritarian parents are highly demanding and directive, but not responsive. The authoritarian parents place firm limits and control on adolescents and allow little verbal exchange, resulting in socially incompetent behaviour, they are high in control and low in responsiveness. Authoritarian parents participate in interactions with their children characterised by low warmth and utilise a strict and harsh discipline style. Children are held to high standards and rules are made that must be followed for fear of punishment. Their child-rearing pattern combines high control and strict and coercive discipline with aggressive behaviours. These parents expect orders to be obeyed without explanation and offer a low level of trust and engagement toward the child.

Uninvolved parents are low in both responsiveness and demandingness. In extreme cases, this parenting style might encompass both rejecting–neglecting and neglectful parents, although most parents of this type fall within the normal range. Uninvolvedness has been observed relatively infrequently in young populations compared to the three other styles but has mainly been reported in studies of adolescents.

The writer is an Assistant Professor of Psychiatry, CARe Medical College, Dhaka, Bangladesh. He can be reached at [email protected]