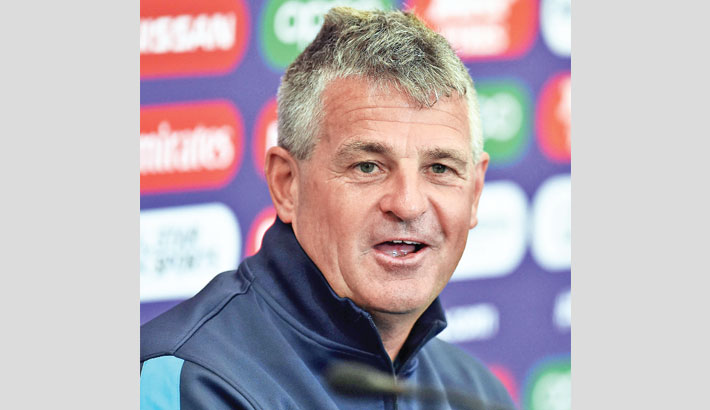 Bangladesh Head Coach Steve Rhodes insisted that ODI skipper Mashrafe Mortaza will decide about his retirement plan and people should spare him for the time being.

Since Bangladesh were knocked out of the semi-final race of ICC World Cup 2019 there are wide spread speculations that Mashrafe might end his 18-year long international journey at Lord’s as the inspirational skipper insisted that he wanted to continue beyond ICC World Cup 2019.

The present captain’s performance in ICC World Cup has come under scrutiny due to the fact that he is not delivering like the way he used to do before, picking only one wicket in seven matches so far.

“The one thing about Mashrafe and the players is that they respect him immensely. I often use the word warrior, but he truly goes to war for the team and people respect that, understand that, and they love him because of that. The players in the dressing room also love Mash, and this is why he has said it’s his last World Cup, and it will be an emotional one for him,” said Rhodes

“Let’s understand and respect Mash’s situation considering this will be his last game World Cup game but concentrate on the cricket. Hopefully, the boys will give him the right sort of respect as he is playing his last game in the World Cup, but most importantly, we will need to concentrate on the match at hand,” he said adding that the hype in the social media do not affect the team.

“The team are now used to a huge press following, lots of media hype, social media. They’re used to headlines by now. So that’s not really going to affect them too much,” felt Steve.

“Mashrafe will decide for himself along with the board, and I think everybody ought to leave that up to them and I think whilst it’s a great story for the media, let’s pay a little respect and let him organise,” told Rhodes

A number of retirements from international cricket are on the cards by the end of ICC World Cup 2019. There have been players who have served their respective teams over the last two decades and one of them is Mashrafe Mortaza but Bangladesh captain is not thinking of retiring immediately after the World Cup. Rhodes added Bangladesh players are eager to do well in Lords as they don’t have the chance to play here very often.

“Yeah, they really enjoyed the walk from the coach through the gates, the great gates. As soon as they got into the pavilion, you could see them looking at the paintings along the walls of the staircase, and then heading into the changing rooms and looking at the boards with five wicket hauls and test match centuries . A few of them headed straight out to the balcony and looking at the marvelous scene in front of them with a beautiful carpeting of grass and big stands everywhere, and they were taking it all in,” said Rhodes.

“Certainly, the experience of playing at Lord’s really is something you should never forget as a person. It’s a real privilege to play here,” he concluded as he prepares to take on Pakistan for Tigers’ last match against Pakistan.