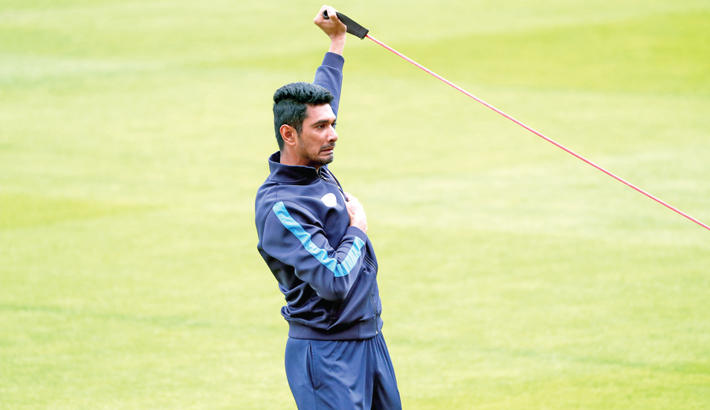 Bangladesh received a huge blow ahead of their crucial ICC World Cup 2019 game against India as injured Mahmudullah Riyad is unlikely to be available for the big match.

Mahmudullah’s availability in the must-win game against India remained a major concern for Tigers as he suffered calf muscle injury during their last game and later it was revealed that he had sustained a grade-one tear.

Bangladesh Cricket Board (BCB) officials were in dilemma about his availability more so after he was seen walking with a crutch the following morning but they seemed to be heaving a sigh of relief as he joined the practice session at Edgbaston in Birmingham on Sunday.

However things didn’t pan out the way they expected after his progress seemed not sufficient to make it into the final eleven against India.

“I don’t think he can make it,” BCB chief selector Minhajul Abedin told daily sun on Monday. The progress is not satisfactory and if it continues in this pace there is very little chance of him being available against India,” he said.

Either Sabbir Rahman or Mohammad Mithun will make it into the playing eleven in place of Mahmudullah though team sources confirmed Sabbir is ahead in the race for the vacant spot.

During the last match against Afghanistan, Mahmudullah suffered a blow on his calf muscle and he struggled while running in the middle. He was also seen batting with compression tape around his calf.

After the blow, Bangladesh physio Thihan Chandramohan had said Mahmudullah would be under observation for a few days.

However, the right-handed all-rounder joined the practice on Sunday and batted for a while in the net session.

Earlier, Bangladesh captain Mashrafe Mortaza also expressed his hope to get the services of the veteran all-rounder in the game against India.