CHESTER-LE-STREET: Sri Lanka beat West Indies by 23 runs in an exciting encounter on Monday between two of the World Cup also-rans in Chester-le-Street, reports AFP.

The 1996 champions posted an imposing total of 338-6, thanks to a maiden one-day international century from Avishka Fernando.

West Indies made a good fist of their chase, with Nicholas Pooran also scoring a first ODI ton, but ultimately fell short. 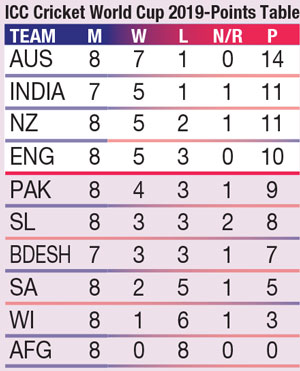 But Pooran and Avishka Fernando have both won hearts and minds with their twin tons. Pooran’s effort has been the crowd favourite with those tuning in to my Live Report and voting in the poll, but it’s Avishka’s that has ultimately brought victory and won the man of the match award for his ton.

It’s around this time in a World Cup that teams whose campaigns haven’t turned out too well start to consider the future. With both West Indies and Sri Lanka both out of contention for further honours in this World Cup, it was left to two of the brightest young talents in each team to light up the dead rubber, and provide a little hope that the next time might not be so bad.

Avishka Fernando, all of 21 years old, scored his maiden international hundred to tee up Sri Lanka’s 338 for 6 - by far their highest total of the tournament, and Nicholas Pooran, three months shy of his 24th birthday, responded with 118 to threaten a remarkable comeback in what could have been a record-breaking chase. Foreshadowing what could be a brighter future for both Sri Lanka and West Indies, this was the first time in World Cup history that two men under the age of 25 scored hundreds in the same match.

Not to be outshone by the youngsters, Angelo Mathews was airdropped in to bowl the 48th over of the innings, having not bowled a single ball previously in this World Cup or, indeed, in any ODI since December 2017. But his first ball may well have been the most important game of the match for Sri Lanka as he dismissed Pooran and turned a back-and-forth contest decisively Sri Lanka’s way before Malinga mopped things up.