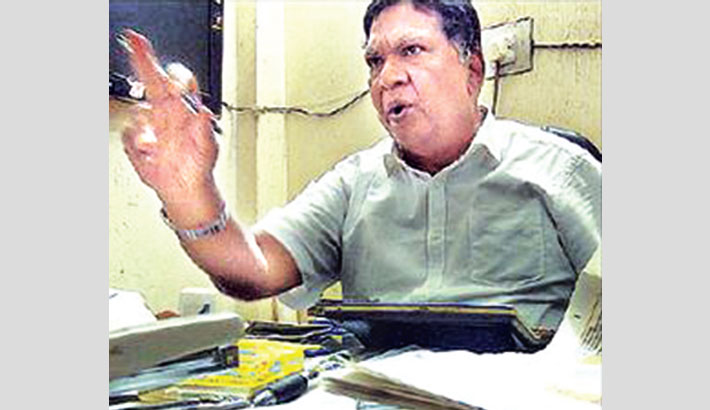 The country’s local industries have plunged into a serious crisis due to uneven competition caused by the sale of imported goods by abusing the bond facilities costing the national exchequer millions of taka.

Despite the crisis, the syndicate allegedly led by Abul Hossain and Fazlur Rahman Parbat, were still free from any legal action to the utter surprise of the sufferers.

Prime Minister Sheikh Hasina in her recent speech in the parliament expressed concern over the loss of the country’s business sector due to the abuse of bond facilities.

She reiterated her government’s tough stance on the illegal activities including the bond abuse.

Aggrieved businessmen said they are curiously waiting to see what happens to the powerful Abul-Fazlur syndicate after the prime minister’s resentment over bond abuse.

Sources said the duo have spread a network covering sea and land ports and brought the wholesalers and retailers within their network to facilitate their sale of bonded goods.

National Board of Revenue (NBR) Chairman Nazibur Rahman and his predecessors took the bond abuse issue seriously and vowed to stop it, but still to no avail.

It is reportedly said that the field level officials sometimes remain puppet at the hand of Abdul-Fazlur group.

Abul is the owner of Abul Market in Nayabazar while Fazlur Rahman Parbat is the president of Bangladesh Paper Merchants Association (BPMA).

It is alleged that the syndicate is so powerful that the field-level customs officials and law enforcers are unable to take any action against them.

If any officer conducted a raid, was transferred somewhere else, sources said.

The government is very serious against money laundering while the central Bangladesh Bank and the Anti-Corruption Commission have gone tough to stop this crime.  Reliable sources in the financial sector alleged that majority of the money earned through bond abuses were being laundered abroad.

Many unscrupulous people have turned into millionaires in a short span of time, leaving genuine entrepreneurs to struggle in an unfair market competition.

Such immoral practice by a section of businessmen is also putting local industries in jeopardy and depriving the government of huge revenues.

In the paper sector alone, the government loses revenue worth around Tk6,000 crore annually for bond abuses, according to the NBR officials. They said the amount of revenue loss would be much higher if bond misuse in other sectors is taken into consideration. Misuse of bond facility in the paper sector is widespread. Revenue board sources said the goods sold by misusing bond facility include paper materials like duplex board, art card, self-copy paper, medium paper, liner paper, paper roll and paper board, fabrics, pp material, PVC resin, HDP and LDP.

Local paper producers are the worst affected by bond misuse as low-quality paper products imported under the duty-free facility are sold in the open market at much cheaper rates.

The government allows duty-free import of clothes and papers to be used in export-oriented RMG and packaging industries.

Imported through bonded warehouse facility, such products are sold in the market illegally. Local paper and cloth producers, who have to pay tax, are put on uneven competition in the market for the sale of duty-free imported products.

The bond abusing syndicate has created a network spreading from various ports to wholesalers in Islampur and Nayabazar of the capital.

Customs Bond Commissionerate and Criminal Investigation Department (CID) have detected a huge amount of money earned by the syndicate members through the abuse of bond.

Molla Nazrul Islam, special superintendent of police (organised crimes) of CID, said: “We are investigating some money laundering cases. The import of duty-free products through fake LC is under the purview of our investigation.”

On August 20, 2017, customs officials seized a large quantity of duty-free imported goods from a covered van in Old Dhaka.

During the investigation, the CID detected a tax evasion of over Tk100 crore by the company. On December 12, 2013, customs intelligence filed a case for importing duplex board through fake documents.

Masud Packaging and Islam Associates in Narayanganj were allegedly involved in the offence.

Uncle Packaging Ltd at Adamji EPZ was also sued for a similar offence. During investigation, CID found involvement of some unscrupulous businessmen, bank officials and C&F agents in the forgery and abuse of the bond facility.

A case was filed against the duo. Customs officials arrested Dipu on January 16 this year. The case was handed over to CID on January 23.

Apu and Dipu are the owners of Chaklader Service and MR Trading respectively. Their main task was to facilitate the import of goods through fake documents.

Khoka Mia, who was a cloth retailer, is now the owner of 15-20 shops in Islampur.

He also owns Nippon Traders and other mills and factories. He uses a broker named Kuddus for bringing the duty-free clothes to his shops.  CID seized passports of Motin Mia, Khoka Mia, Nesar Molla, Awlad, Ainal, Roni, Momen Ali and Kuddus for their involvement in the bond abuse trade.

According to Bangladesh Paper Mill Association (BPMA) data, 106 paper mills in the country have a combined capacity to produce 15 lakh (1.5 million) tonnes against the local demand 10-12 lakh tonnes.

Unscrupulous importers have flooded the local market with paper products imported under bonded warehouse facility, resulting in closure of many paper mills.

Purana Paltan, Naya Paltan Naya Bazar, Bangla Bazar and Arambagh areas in the capital are the points where illegal paper products are sold.

BPMA Secretary Nawsherul Alam said any setback for the sector will result in the unemployment of 15 lakh people and affect around 60 lakh family members dependent upon them.

The government allows import of paper products under bonded warehouse facility to be used for packaging of export-oriented RMG goods and for other specific purposes.

He said if a businessman imports 500 tonnes of paper against the permission of 100 tonnes, the extra amount will be sold in the market.

The people involved in bond facility misuse are so powerful that sometimes customs intelligence officials fail to take stern action against them, he claimed.

Sources at Bangladesh Textile Mills Association (BTMA) said there are around 1,500 textile mills, 450 spinning mills, 800 weaving mills, and 250 dyeing and printing mills in the country. But the sale of imported cloth through the abuse of bond has put the sector in a trouble.

According to BGMEA president Rubana Huq, the RMG regulating body is always against the bond abuse.

She vowed tougher action against any member if involved in such crime. Rubana sought information from NBR in this regard.