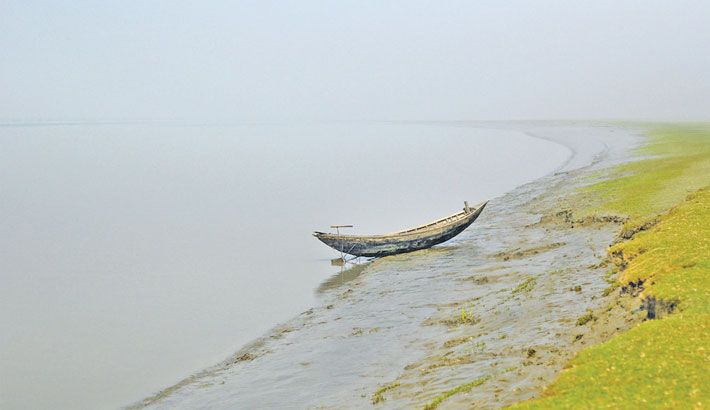 The plan was to join Trekker BD and explore the local river valleys after finishing Lakher Batti in Bhola. But Typhoid hit me like an iceberg and I was bedridden as a result. I was not late at all to make a trip plan covering Kukri-Shonar chor- Dhal chor- Nijhum Dwip as soon as I recovered. As the boat we had could only carry a few people, Raka, Rijvi, Tarek and I boarded the boat while Rakib planned to join us later. Noor insisted on his joining with us prior to the trip. How we couldn't have taken a man along who claimed to swim and follow us on the trip?

Though we distributed the works between all the team members, Rakib could only manage drinking water jar failed to buy a fishing net in those two weeks. We could buy one if he would let us know that he wouldn't be able to manage time.

Before the departure, Rakib informed that he is stuck in some emergency while Nooru bhai had to pick up his national ID which was to be distributed on that very day. So, we thought to count Shantanu in for we were short in number.

Upon reaching Sadarghat launch terminal, we were disgusted after boarding Farhan-5 when we saw the cabin we booked is already occupied by someone else. We sat with our baggage at the terminal while Rijvi was calling Rakib, Rakib was calling the launch staff in turn in vain. It was a real mess.

After a while one of the staffs remembered that there was bookings from a navy personnel. "The dumb (Rakib) must have said something like that but he himself forgot it", I muttered. Then get on with our gossip putting the bags aside.

We reached the Betuwa ghat very early in the morning. We board off and had our breakfast. After that we started pumping the inflatable boat. But to our utter disappointment, we noticed a leak in one of the chambers. We were disgusted. We again glued the leak which would take 24 hours to settle down. Rajvi suggested that we would wait untill we had two hours in hand and start for the trip anyhow after that. After a couple of hours we pumped the boat to check on the leak again. Rijvi and Pot were sent to buy 70 liters of fuel and 20 liters of water.

We uploaded everything we needed and started around 12 at noon. We were headed as slowly as a turle with 5km/hour with our speed boat as our boat was overloaded and the engine was still to pick up from the breaking period. We kept on going slowly.There were fisheries set in our course which made it difficult to head straight. We took a break around 3 O'clock near a point to drop by and eat. We tied the boat and came up to see all the shops were closed. Some of them were opened though we didn't find anyone. At last we found a restaurant. Upon asking, we got to know that everyone fled away in fear seeing us coming. We further learnt that fishing is banned for this period of time and they thought we were coast guards seeing us in life jackets. We assured them we were  not coast guard. We went to a shop and asked for fishing net. He fiercely nodded his head in fear and refused to sale any fishing net whatsoever. We realised no one would sale us any net. While taking rest I asked a local, "Why is there so many net set up even though fishing is banned here?" He acted as if he didn't see any net set up and tried to avoid the topic.

Within a few minutes, the waves began to get stronger and bigger. One after another, the waves came and got us drenched.  Water started to accumulate in our boat. We somehow managed to cover our bags with polythene. Rijvi cut a plastic bottle and started to drain the boat. We kept on going through the waves but we lost the route. To make matter worse, the route I preloaded on my GPS stopped working. Google map on our cellphones was the only hope, even though it doesn't work that properly. We brought out the Go-Pro but the card was in my bag. I couldn't even open the bag then. At that time, it was almost afternoon. As per my calculation we were about to leave Char Fashion and fall into the river. Kukri was waiting for us on the other side of the river. Rijvi insisted “ Lets find some place and take a break for the night, we won’t be able to see anything at night, we’ll have to sit on the mud all night. I thought to go on for a little more. Crossing the river, we entered into a large canal and found Kukri at the opposite side. At that time the sun was almost out and our headlights were the only thing we could rely on for light. After cruising for a while we realised that we’ve passed through and left the boat terminal near the market behind. We had to reverse our way back. Seeing a light in the distant horizon we traced the canal. Because of the low tide the canal hardly had any water. As a result, we couldn’t trace it in the first place. After going on for a while our boat was stuck in mud. We crawled our way to the ground all drenched and cold. We called the local boatman Babul. He assured that the situatiuon will improve as the high tide approaches in a couple of hours. After the high tide hit, we started again and reached the Kukri ghat within 10 minutes.

Babul helped us to keep the boat and the belogings we carried with us for camping at the forest office. We knocked at the Upazila complex, a recently opened guest house but in vain. Babul bhai offered his own house for the night as well. As I visited Kukri for a number of times, the Chairman knew me very well. At last he arranged a large room for us.

The next morning we bought all the necessary food and accessories needed, took the boat and started for Patilar Char. The next two days, we spent here in serenity. We set up our tents, camped here, cooked, ate, gossiped, laughed until it came to an end. Raka and I stayed back while the others departed for Dhaka. We sat under a tree in Patilar Char and enjoyed. We waited for the water level to go up so that we can head towards Dhal char. We visited a number of valleys, went through Dhal Char and reached Nijhum Dwip in the afternoon that day. We concluded our trip in Hatiya launch ghat after a two days stay at Nijhum Dwip.