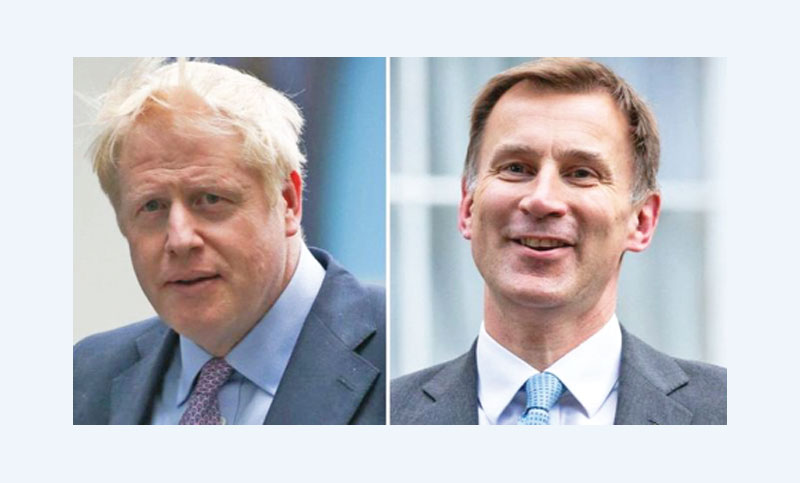 LONDON: Tory leadership rivals Boris Johnson and Jeremy Hunt are at loggerheads over how the UK should leave the EU, reports BBC.

Both contenders for prime minister claim they can renegotiate a Brexit deal that the EU says is closed.

Johnson said the UK must leave on 31 October “deal or no deal” but Hunt called this a “fake deadline” that could trigger a general election if Parliament rejects a no-deal Brexit.

The winner of the contest will take over from Theresa May on 24 July.

In an interview with Talk Radio, Johnson insisted he would take the UK out of the EU by Halloween “come what may, do or die” and has challenged his opponent to make the same commitment.

Hunt said he would leave the EU without a deal, but not if there was a “prospect of a better deal”.

But former Brexit secretary Dominic Raab, who is backing Johnson, said Hunt had shown “weakness” and “naivety” by entertaining the possibility of another extension. “The minute you start flirting with an extension, you undermine your negotiating leverage,” he told BBC Radio 4’s Today programme.

He said it would be the “EU’s choice” to see the UK leave without an agreement, adding: “There is nothing stopping us getting a deal by October, if there’s the political will.” He added that any motion passed by MPs requiring the new prime minister to extend Brexit talks would have “zero legal effect”.

He predicted “vanishingly few” Tory MPs would vote to bring down a government pursuing a no-deal exit in a vote of no confidence - even though Defence Minister Tobias Ellwood has said “a dozen or so” Conservatives could support such a move.

It comes as International Trade Secretary Liam Fox - who is backing Hunt - again criticised Mr Johnson’s claim that the UK could continue tariff-free trade with the EU in the event of a no-deal Brexit.

Johnson has argued that a provision under the General Agreement on Tariffs and Trade - known as GATT 24 - could be used to avoid tariffs for up to 10 years.

But Dr Fox said this would require the agreement of the EU, which Brussels has made clear it would not give.

He added it was important that public debate on the topic was conducted “on the basis of fact rather than supposition”.

On Tuesday, Mr Johnson conceded that his plan would require the approval of the rest of the EU, but insisted it was still “an option”. Boris Johnson and Jeremy Hunt say they are serious about pushing for a no-deal Brexit if they are unable to negotiate a better withdrawal agreement with Brussels.