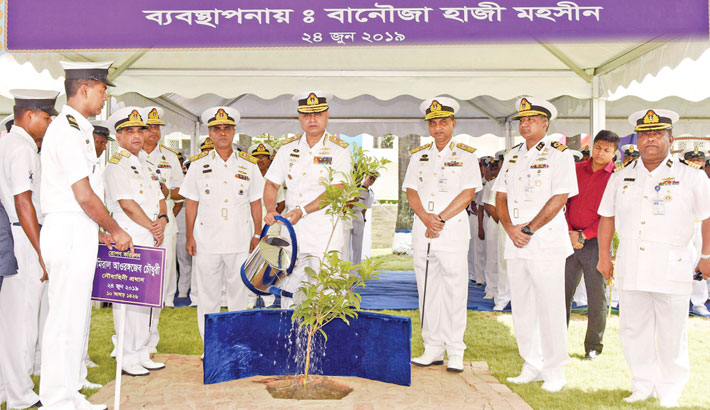 Chief of Naval Staff Admiral Aurangzeb Chowdhury waters a sapling after planting it at the Naval Headquarters in the city on Monday as part of the ‘National Tree Plantation Campaign -2019’. – ISPR PHOTO

Bangladesh Navy has launched a tree-planting programme across the country as part of the implementation of ‘National Tree Plantation Campaign -2019’.

Chief of Naval Staff Admiral Aurangzeb Chowdhury formally inaugurated the programme by planting a sapling at the Naval Headquarters in the city on Monday.

Later, a special munajat was held for the success of the programme.

Under the program, steps have been taken to plant different types of fruit, herb, timber and shade trees at all the naval zones.

The navy chief emphasized the importance of planting trees in coastal areas in order to protect the locality from natural disasters and preserve the local ecosystem.

Principal staff officers of navy headquarters, area commander of Dhaka, military and civilian officials, staff and sailors were present at the event.