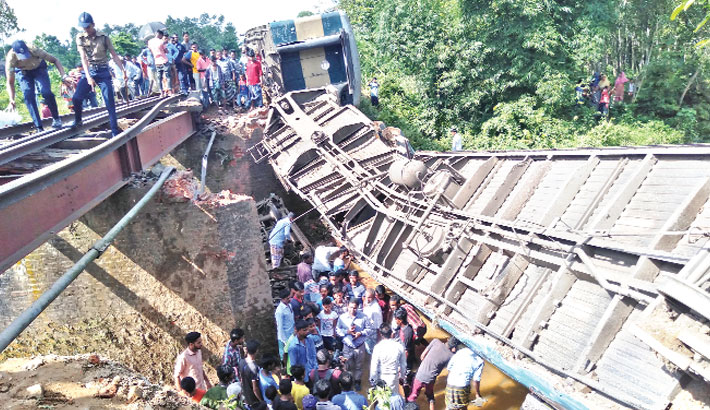 Members of Fire Service and Civil Defence are carrying out rescue operation after the passenger train Upaban Express derailed and plunged into a canal near Boromchal railway crossing at Kulaura upazila of Moulvibazar district on Sunday. —Mamun Hossain

Weak bridge and overcrowding of the train might have been the main reasons behind the derailment of Upaban Express in Moulvibazar that left at least four people killed and over two hundred were injured, according to a Railway official.

“Rail connectivity between Dhaka and Sylhet has been restored as the repair of the damaged rail track has been completed at 6:35 pm followed by a test run of the track. The route is now safe for trains,” said Aminul Haque, manager of Dhaka’s Kamalapur Railway Station.

The Railway Ministry on Monday formed two zonal and departmental probe bodies to investigate the incident. The probe committees were asked to submit their reports in three working days.

“The prime minister also asked the Railway Minister to build or repair bridges after identifying the vulnerable and weak bridges,” Alam said.

Rail connectivity between Dhaka and Sylhet remained suspended for the last three days due to the collapse of a bridge in Brahmanbaria.

While visiting the spot, Railway Secretary Mofazzel Hossain has said “Either the lines were faulty or the alignment of the coach wheels was disoriented,” adding that actual reasons will be known after the probe bodies submit their reports.

Earlier, a rescue train conducted rescue operations in the spot. “Upaban Express was taken to Kamalapur Railway Station with seven carriages in the morning,” said Aminul Haque, the station’s manager.

In Dhaka, regular trips of two trains – Kalni Express and Jayantika Express – have been cancelled. Kamalapur station is returning the tickets, said the manager.

According to the passengers and locals, the Upaban Expressed departed on time on the day at 10:00 pm, but halted for an hour at Moglabazar station, just a couple of kilometres from Sylhet station, to cross inbound Kalni Express.

It started gaining speed after departing from Maijgaon Station in Fenchuganj and derailed while crossing a small bridge at Baramchal and fell into a canal. The incident took place on a bridge, which has collapsed, and the lines broken apart.  Two compartments of the train fell into the canal and one of them overturned.

Four passengers were dead and more than 200 others injured in the derailment. The injured have been receiving treatment at different local hospitals including Kulaura Health Complex, Moulvibazar Sadar Hospital and Sylhet MAG Osmani Medical College Hospital.